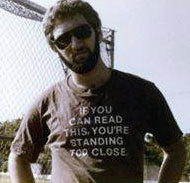 Robert "Bob" Kaplan September 10, 1954 - January 25, 2016 Funny, kind, sweet, extremely tolerant, nonjudgmental, smart, eccentric, original, unique, quirky, witty, youthful, the reason the word "unflappable" was invented, and in possession of a wit so dry it crackled: These are some of the ways Bob "Nice Guy" Kaplan has been described by his friends, family, and coworkers. At the age of 61 Robert Barry Kaplan made the "big trip," as he called it, on January 25, 2016, at Torrance Memorial Hospital. A longtime resident of Rancho Palos Verdes, California, he had lived with islet cell tumors, a form of neuroendocrine cancer, for more than 10 years. Truly, no one else was ever like him. His original artistic creations included an "I'd rather be driving" bumper sticker, eyeglasses with multicolor stained glass lenses, an electric fork, and a plastic electric plant. He wrote a letter to his college newspaper that cogently argued for putting time and the calendar on the metric system, and he authored several books and anthologies featuring his uniquely quirky stories. Everyone's favorite story about Bob may be the time he came home to find a homeless burglar. Rather than panicking or calling the police, Bob fed him, gave him some cash, and drove him to a location where he could thumb a ride out of town. Bob was born in Los Angeles on September 10, 1954, to Geraldine "Jerry" Weber Kaplan and Charles Kaplan. He grew up in the San Fernando Valley, first in Sherman Oaks and then moving in 1963 to an Eichler home in Granada Hills. That move, to a mid-century modern-style house, inspired his lifelong appreciation of minimalist architecture. Other early pivotal experiences took place during 1963 and 1964, when his family lived in Clermont-Ferrand, France, and traveled around Europe in a VW bus. Going to the local school, having to learn French, eating strange foods, meeting many new and different people, and driving around the continent with his family provided an early view of a larger world and how odd it can be. After graduating from the University of California, Irvine, in 1976, Bob worked as a software developer and engineer at several companies before landing at Xerox, where he stayed for more than 30 years. His math abilities were unique among his immediate family members. His older sister, Jean, recalls how he helped with her algebra homework, but warned her, "This isn't the way your teacher will do it, but you get the right answer anyway." (He had not yet taken an algebra class, and he did have the right answer.) Bob's illness caused many complications and sapped his strength. He downplayed the negatives and insisted that he was not his cancer, and he did everything he could to keep living. But when his treatment options ran out, he made the decision to die with dignity with comfort care. His survivors include his sisters Claire Brees and Jean Kaplan Teichroew (husband Allan); his nephews Jacob (wife Christina and due-this-summer great nephew) and Peter (wife Chontelle) Teichroew; as well as his nonbiological family Cathy, David, Caitlin, and Evan Howell. He will be missed by all those who ever knew him. His sister Claire is planning a memorial to take place in April 2016; notices will be emailed and posted on Facebook. Donations may be sent to the American Cancer Society or the organization of your choice.