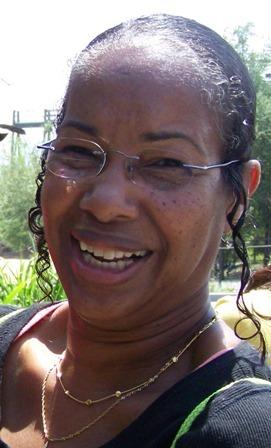 Robbie Adams Small, 56, of Los Angeles, died Sunday, December 22, 2013 at Centenila Community Hospital in Inglewood, CA. She was born April 25, 1957 in Los Angeles, CA to Robert Lincoln Adams Jr. and Betty Jean Adams. Robbie attended John C. Fremont High School in Los Angeles and was part of the class of 1974. Robbie became a mother at the young age of 17 with the birth of her first son, Dayman Dewayne Adams Sr. On February 16, 1980 she was united in marriage to Cecil Maurice Small. They later had two children, Jarrett William Small and Nicole Denise Small. They divorced in 1998. She worked as a factory foreman for Jerseymaid Ice Cream for over 25 years. At the time of her death, she worked as an assistant accounting clerk for Superior Supermarkets in Los Angeles. Robbie was an avid sports fan and a die-hard Lakers and 49er's fan. When not cheering for her teams, she enjoyed spending time with her four grandchildren and playing bingo with hers sisters and friends. Robbie was an enthusiastic "do-it-yourself'er" who never met a project too big or a color she didn't like. She was a rummage sale queen...always looking for a great deal. Robbie was super competitive and played a mean game of scrabble-just make sure you have a dictionary on hand to check her spelling! Robbie supported the fight against cancer by participating in the Revlon walk each year with family and friends. She had an infectious laugh that could be heard around the corner and a love for life. She was loved and cared for by many friends and family. Robbie is preceded in death by her father, mother and sister, Diane Adams. She is survived by her children Dayman D. Adams Sr., Jarrett W. Small and Nicole D. Small; daughter-in-law Terri Parks Adams; sisters Carolyn Miffin, Sharond Morris Allen, Lena Mae Garr and Brigette Starks; brothers Keith Adams and Charles Adams. Robbie also leaves behind her adored grandchildren; Dayman D. Adams Jr., Isaac E. Adams, Quinton R. Adams and Leah Small as well as a host of aunts, uncles, cousins and friends. A gathering of family & friends will be held at McCormick Mortuary in Inglewood on Thursday January 2, 2014 from 5 to 9pm. The Service will be held at Faithful Central Bible Church in Inglewood the next day at 11am.