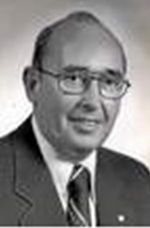 Dick Rossberg died peacefully on June 10th at his Hollywood Riviera home surrounded by family members. He was 87. Rossberg, a resident of Torrance since 1956, was well known for his love and devotion to his family and his community.           He served two Torrance City Council terms, was past president of the Torrance Area Chamber of Commerce and a former chairman of the Armed Forces Day Parade committee. In addition to his Torrance civic roles, Rossberg assumed a leadership role in many other local organizations: Riviera Little League, Palos Verdes Rotary, Hollywood Riviera Sportsman's Club, South Bay Cities Association and Los Verdes Men's Golf Club.           Rossberg was honored with numerous awards, including: 1970 Rotary Paul Harris Award, 1978 Torrance Area YMCA Distinguished Service Award, 1986 George Whittlesey Memorial Award and 1987 Torrance Distinguished Citizen Award. In 2002, he received the Jared Sidney Torrance Award, the city's highest honor for a lifetime of community service.           Born January 9, 1928 in Waukegan, Illinois, Rossberg grew up in Chicago. An avid athlete, he was captain of his high school basketball, football and baseball teams. After high school, he worked his way up from mailroom to account executive at a major Chicago advertising agency, while also attending Northwestern University. That is where he met June, his beloved wife of 62 years. Rossberg was transferred to Southern California in 1956 and bought a home in Torrance. Having fallen in love with life in the South Bay, he turned down a promotion to return to Chicago in 1954. In typical Rossberg fashion, he put 100% effort into his new goal of raising his family in Torrance, completely changing careers to become a financial advisor. A successful 43 year career ensued until his well-deserved retirement in 2007 at the age of 79.           Rossberg gave much of himself to his family, his friends and his community but still always made time for golf. He was especially proud of sinking an amazing five hole-in-ones!           He is survived by his beloved wife, June, and children: Claudia Rossberg McClain (Patrick) of Everett, WA; Chris Rossberg (Miyuki) of Torrance; Jill Rossberg Carlton (Steve) of Rancho Palos Verdes and Kirk Rossberg (Margie) of Torrance; three grandchildren and one great grandchild.           Services will be held on Wednesday, June 24th at 3pm at St. Lawrence Martyr Church in Redondo Beach, with reception immediately following in the church hall. In lieu of flowers, the family requests that donations be made in Dick Rossberg's name to the Youth Leadership Torrance program c/o the Torrance Chamber of Commerce.