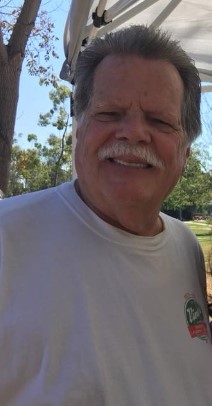 Richard Marshall Rose was born in Inglewood on March 19, 1946 to Claude

and Juanita Rose.  The family moved to Redondo Beach a few years later

where he was raised with older brothers Dennis and Robert.  Rick attended

Beryl, Hillcrest and then Redondo Union High School where he pulled lots of

pranks when not surfing or playing football.  After graduating in 1963, he went

on to El Camino College.  It was one summer night at the local hotdog hangout

that he met his future wife, Susanne Pina of Hermosa Beach.  Convincing her to

go out on a date with him, they never left each other’s side for 57 years. They

married at Our Lady of Guadalupe Catholic Church in January 1965.  That union

Beach.  They were all so loved by him.

took him to most aerospace facilities including Hughes Aircraft, Singer Librascope,

Beach.  Rick made many lifelong friendships with his engineering coworkers.

After a relationship with a Los Angeles adoption agency in the 90’s, Rick and Susie

were asked by the agency to be parent group leaders for potential adoptive families.

For over fifteen  years, that parent support group, Parents and Children Together,

helped many navigate the system and form their family.  Further, that parent support

he joined Susie at Adoption Information Center where, as an Adoption Coordinator,

connecting them with waiting adoptive families.  More than 400 families were made

Rick had a generous heart.  He never said no to anyone who needed a place to stay or

a meal to be eaten.  He was always by Susie’s side when they conducted their annual

Thanksgiving Basket distribution for the needy birthmothers they knew or collecting

hundreds of gifts during the holidays for the foster children of Los Angeles county.

Although Rick was not Latin, he married into a large South Bay Mexican family that

loved him dearly and were just as willing to have a good time like he did.   His love for

sports and the Los Angeles Rams was shared with his children and extended family.

He would shout “Go Rammers” even if the Dodgers or Lakers were playing.  He loved

the theatre taking all of his children to every play possible “front row and center.”  Rick

loved history and would talk about “the wars” for hours if you let  him, rock and roll,

Sara passed away).  He loved the South Bay and never wanted to move anywhere else.

Ginger, and their family, many cousins, nieces, nephews, godchildren, friends and colleagues.

God speed, Rick, we will remember you with a smile on our faces.

After Mass, we will go by Procession to: