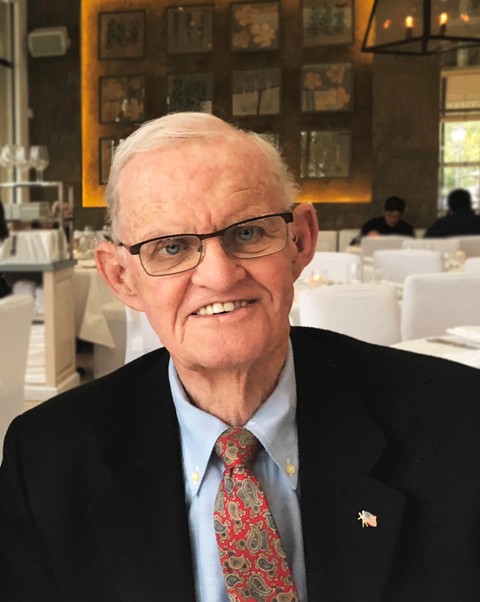 In Loving Memory Richard J. Switz May 18, 1928 - October 14, 2018 Richard 'Dick' Switz was born in a farmhouse in Switz City, Indiana, son of Henry 'Bud' and Lucille Switz with older brother Donald and younger brother Hal. He grew up working the family farm in a town named for his great-grandfather while attending Switz City High School. Richard graduated from Purdue University, for which he maintained lifelong affection and pride, earning a Bachelor of Science in Civil Engineering. He was drafted after graduation into the U.S. Army, serving two years assigned to the Corps of Engineers in the Pentagon, where he eventually met Bernadette Rendish in Washington DC. Richard and Bernadette married in Washington on June 5, 1954 and shortly thereafter he accepted a job with Ryan Aircraft, relocating to sunny San Diego, beginning the California adventure lasting the rest of his life. He enjoyed music, photography, traveling, time with family and friends and adored his grand/great-grandkids. Richard spent most of his career with Hughes Aircraft, moving to El Segundo in 1966 from Reseda and was a key part of designing Surveyor - the first spacecraft to successfully soft-land on the Moon to prepare for the Apollo astronauts' arrival, communication satellites and exploring other planets with Pioneer Venus and Galileo. After retiring in the mid-80s as Chief Scientist, Richard was elected for four years on the El Segundo City Council to proudly serve his hometown and with Berna was a parishioner of St. Anthony's for over 50 years. Richard's dear wife Bernadette passed away in August 2010; he joined her after a brief illness, passing peacefully at Torrance Memorial Hospital surrounded by family. He is survived by children Jim Switz and Rita Nelson (both of WA State) and Lauren Harger in Manhattan Beach, grandchildren Laura Skobin, Jenna Nelson, Sean and Megan Harger, and great-grandchildren Linken and Olia Skobin. A funeral was held at American Martyrs Catholic Church in Manhattan Beach on October 23rd and Richard was interred with Bernadette at Holy Cross Cemetery in Culver City. In lieu of flowers, Richard's family would prefer those who remember him to hold warm thoughts and memories.