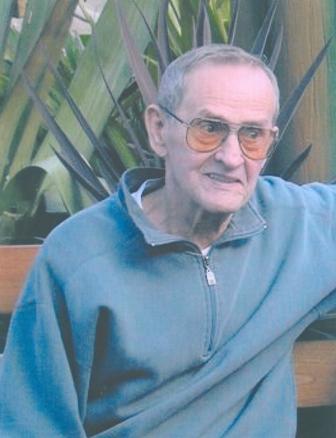 Richard Gaston Lacroix September 12, 1928 - February 4, 2012 Richard Lacroix passed away at home on Saturday, February 4, 2012, surrounded by his family. Born in St. Johnsbury, Vermont, he moved his family to California in 1959 settling in Redondo Beach and finally moving to Torrance. Richard was 83 when he passed away. He is survived by his wife, Marjorie of 64 years; his son Gary (Robin); their son Robert; and their daughter JoAnne (Luis) Howard. Richard had six grandchildren, David, Larry, Michael, Brian, Tony, and Katherine. He had seven great grandchildren, Kyle, Hayley, Jocelyn, Matthew, Jackie, Gavin and Garrett. He is also survived by his sister Rita (Edsel) Bean in Vermont. Richard served in the US Navy between 1946 and 1954. He was in the reserves and then recalled during the Korean Crisis. He was discharged in 1954 and is a current member of the American Legion. Richard was a long time Kings Hockey fan who liked to needle his grandsons by pretending to be a Ducks fan. Richard worked for the United States Postal Service in Redondo Beach for 27 years and retired in 1990. Richard was a very caring, loving, generous man and will be greatly missed by all who knew him. There will be a funeral Mass on Friday February 10, at 10:00 am at St. James Catholic Church, where he has been a parishioner for over forty years, followed by a burial at Pacific Crest Cemetery. In lieu of flowers, donations may be made to Providence Trinity Care Hospice, 2601 Airport Drive, Suite 230, Torrance, CA 90505.