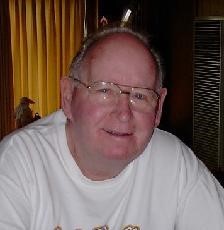 Richard (Dick) Ervin Jones, 87, passed away peacefully on July 12, 2016 in Torrance, California. He was welcomed into The Lord's Kingdom by his eldest son, Lawrence. Dick was a loving example to his family, friends and loved ones. We will miss you dearly. Your kindness, compassion and unconditional love will be in our hearts forever. Dick was born November 25, 1928 in Alliance, Nebraska to Albert and Amanda Jones. He met Marlys Jean Skinner in Alliance and they were married on June 14, 1955. After honorably serving in the United States Marine Corps, he and Marlys moved to Torrance. Dick attended Harbor City College where he learned basic printing standards and later became a Steel Engraver at Jeffries Banknote Company. He coached youth sports and donated his time to St. James Catholic Church. A favorite activity was taking the family to Pine Flat Lake, where he spent endless hours towing the family behind their boat, the Lazy J's Daze. After 31 years, Dick retired and began touring the US, visiting all the state capitols in a motor home with his wife. He enjoyed reading and spending time with his wife, children and grandchildren. Dick had an amazing way of making every one of his children and grandchildren feel as they were his favorite. He is survived by his loving wife of 61 years, Marlys; daughter-in-law, Anne Imrie Jones; daughter, Kathy Teng (husband Bing); sons, Paul Jones (wife Corinne) and Duane Jones (wife Audrey); 10 grandchildren Justin, Kristin, Nicholas, Kevin, Christian, Alexandra, Jordan, Ashley, Robert, Kylie; great grandson Chase and 2 more great grandchildren expected soon; brother, Dean Jones and sister, Catherine Anderson. A Celebration of Life for Dick will be held at Rice Mortuary 5310 Torrance Boulevard on August 8 at 6:30pm. In lieu of flowers, donations may be made in memory of Richard E. Jones to the American Heart Association .