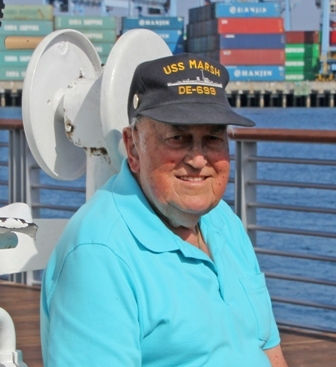 Richard A. "Dick" Knight July 6, 1929 to May 20, 2015 Long time South Bay resident, Dick Knight passed away Wednesday, May 20, surrounded by his loving family. He fought a brave battle after being diagnosed with Stage 4 Pancreatic Cancer, in October 2014. Sadly, he succumbed to Congestive Heart Failure, during an 11-day stay at Little Company of Mary Hospital, Torrance, CA. Born in Inglewood, CA, he attended Redondo Beach Schools, graduating Redondo Union High School, in 1947. He attended El Camino College and Humboldt State. He served in the Navel Reserve for 16 years, and was on active duty during the "Berlin Crisis" in 1961. He was a postal carrier, in Redondo Beach where he met his future wife, Ann. They married 1953. He worked for Bank of America for many years, and made some lifelong friendships there. While working for the bank, Dick became quite active in the Kiwanis Club and served as President for the Hermosa Beach Chapter. He was also an avid CBer (Citizen Band Radio) in the 60's, and involved in REACT (still in existence), which was a group that monitored the emergency channel, at that time, channel 9, and would help fellow CBer's while they were on the road needing help or reporting incidences requiring police, fire or ambulance. (This is how things were done before cell phones!) The group also volunteered throughout the community. He shared membership with a childhood friend, Bob Trump "Chrome Dome" and his wife Bonnie. They had a friendship that lasted for many, many years. He loved being on the radio, and had a base unit at home and one in each car for many years. He was known as the "Banker" and quite popular on the air. Dick along with his wife were both active for many years bowling in leagues, at Gable House Bowl in Torrance, and spent many a fun time with bowling partners, Dan and Maxine Reville . He also loved to golf, and spending time with his golf buddies, getting together at least twice a week for many years. One of his happiest times was purchasing clubs for, and sharing golf, with his Granddaughter, Becca. He shared another love and pastime with her, fishing, at Lake Gregory, in Crestline, CA. In the last, few years, after not understanding his daughter's love of hockey, he became a Los Angeles Kings fan. He would watch the games wearing the hat she had given him, calling her to complain when they pulled the goalie. He never could understand that "stupid" play or the reason behind it because, "They lose every time they do that!" Sharri was thrilled to share this love of hockey with him. He very much enjoyed the group Senile Seahawks and their once a month, Tuesday lunches; also CASearcher, which kept RUHS alumni in touch. He was able to reconnect with many old friends, which brought him joy. He so loved to relive, and share the old memories that only a few now, can remember. Dick was a wonderful and loving, Husband, Father, Grandfather, and Friend. He was loved by many, and will be missed by all. His wife, Ann, of 61 years, survives him, as well as, Daughter, Sharri and Granddaughter, Rebecca "Becca" Knight. Stepson, Richard Snider (Suzan). Grandchildren, Sarajane Forbes (Chris), Rachel Oneal, and 4 Great-grandchildren. Survived also, by his sister Marjorie Carney, who now resides in Powder Springs, GA, and many Nieces and Nephews. In lieu of flowers, please make a donation to Pancreatic Cancer, Heart Fund, or a charity of your choice. All are welcome to join, to share tears, (laughter), and memories.