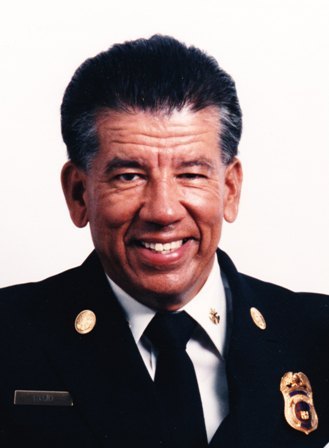 Saturday, March 20 marked the end of an era. Retired Chief Reynaldo "Rey" Trevino Rojo, age 82, passed away at Little Company of Mary Hospital surrounded by family and holding the hand of his wife. A proud Texas native, Rey was born October 19, 1933 in San Antonio. Although Los Angeles became his adopted home, Texas always held a special place in his heart. He graduated from USC in 1961 and remained a true Trojan for the rest of his life. Rey embodied the spirit of hard work. As a child he helped support his family by selling watermelons by the road. At 18, he earned his wings as an Army Paratrooper. In his early 20s, he met and married Carole, the love of his life; and by 26 he started a fulfilling and distinguished 36-year career with the Los Angeles City Fire Department, culminating in his appointment to Deputy Chief. A stanch believer in forging his own road, Rey was fond of reminding himself "The harder I work, the luckier I get." Rey's dedication to the community will best be remembered by friends and family. He had a true calling towards service and actively participated in organizations such as Torrance Sertoma, Knights of Columbus, Big Brothers of Greater Los Angeles, and the East LA YMCA. He was an early South Bay AYSO coach and referee, and took pride in coaching for 12 years. Over 300 of his Fire Science students from Harbor and El Camino Colleges are now active duty firefighters. Driven by a quest to go forth and help others, to give them the kind of life he worked hard at creating for himself and his family, Rey continued to be actively involved in many of these organizations until his health declined. For all his other accomplishments, fire department red ran through Rey's veins. His legacy lives on through the LAFD Toys for Needy Children program he began in 1976 with toys out of the trunk of his car. Through his leadership and guidance, "the toy program," as he fondly called it, has now delivered over 3.5 million toys to families in need year-round. Rey is survived by his loving wife of 59 years, Carole Mancini Rojo; his three children: Sandra (Larry) Edgett, Rey M. (Aimee) Rojo, and Carla Rojo; seven grandchildren; his five sisters: Olivia Brown, Maria Dolores Gomez, Rebecca McCutcheon, Gloria Merritt, and Margaret Newborn; and their families. A Celebration of Life Mass is scheduled Thursday, March 31 at 10:00 am at Saint Lawrence Martyr Catholic Church, 1900 S. Prospect Ave, Redondo Beach. In lieu of flowers, the family requests donations be made to organizations near and dear to Rey's heart: STAR House, Incorporated PO Box 1075 Torrance, CA 90505 House of Yahweh PO Box 1089 Lawndale, CA 90260