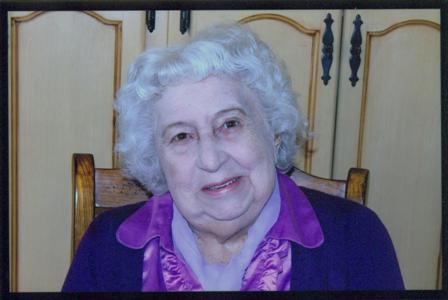 Regina Olanda (Magnante) Lyden November 5, 1920 – June 2, 2014 Beloved wife, mother, sister, aunt, grandmother, great-grandmother, great-great-grandmother, Regina joined her Lord in Heaven on June 2, 2014 at the age of 93. She was born at home in Los Angeles on November 5, 1920 to Egidio and Concetta (Presta) Magnante. When Regina was 11 months old, her family moved to Torrance, California, where they built four houses on Anza (Valerie) Avenue. She attended school in Redondo Beach, and after graduating from Redondo Union High School, she worked at the Palos Verdes Library and also baked bundt cakes that were served in a tea leaf reading store in Torrance. After she was married, she worked intermittently on the assembly line at AiResearch in Torrance and also worked as a private and commercial seamstress. She enjoyed cooking for her family, was an accomplished china painter, master cake decorator and avid reader. Regina married the love of her life, George Pershing Lyden on June 28, 1941. They were happily married for 53 years. They had three children, Karen Jean Erbetta, Victoria Georgene Glass, and George (Bill) William Lyden. Regina was predeceased by her husband George, and her children Karen and George (Bill). She is survived by her daughter Victoria, granddaughters Wendi Reece (Gary), Tabetha Ouellette (Gary), Deborah Auten (Don), Aestocia (Lisa) Ramirez (Mark), and grandson Darrell Lyden (Amy), 11 great-grandchildren and 4 great-great grandchildren. Regina and George lived in Torrance on Yukon and Beech Avenues for the majority of their married life. They retired to North Fork, California, the place of their dreams, where George was able to follow his passion for farming, and where Regina thoroughly enjoyed canning their garden harvest, china painting, sewing, crafting, and spending time with her family. They moved back to Torrance in 1991 and lived in Skyline Mobil Home Park until the death of George in 1994. Shortly thereafter, Regina moved in with her granddaughter, Wendi Reece, husband Gary, and sons Kyle and Adam, in Rolling Hills Estates where she happily resided for the remainder of her life; a wish fulfilled. Regina devoted her life to her family, and was kind and generous to everyone who passed her way. A selfless, gracious and humble woman who was happiest when her family was all together. She was the center of the family, the "glue", the "rock", and she will be sorely missed, but we know the angels in Heaven are rejoicing! Funeral services will be held on June 13 at Pacific Crest Cemetery, 2701 182nd St., Redondo Beach: 10:00-11:00 a.m. Visitation: 11:00 a.m. Chapel Service: 12:00 p.m. Graveside Service.