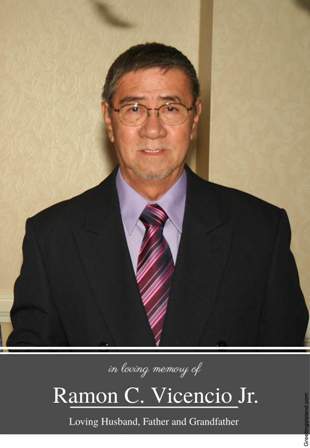 Ramon Cornes Vicencio, Jr. (76 years old), joined his Creator on Monday, August 24, 2015, with his devoted wife Luz by his side and surrounded by his loving children, grandchildren and great-grand babies. Ramon was the son of Ramon B. Vicencio and Leonisa C. Vicencio, born in the Philippines on October 26, 1938. He was fourth among seven siblings, namely Leonisa, Aida, Divinia, Norberto, Marinela, and Ricardo. Ramon Jr. and Luz had five children of their own: Ramon III, Marissa, Rommel, Ramir and Melanie. In 1988, Ramon Jr. left the Philippines for America to pursue a better life for his family, even if that meant leaving some of them behind. Through many years of hard work, endless determination and relentless prayers he finally had his whole family together in 2006 when his son, Rommel, moved to America with his family. Ramon Jr. has sixteen grandchildren and in the past year, was blessed with the birth of three great-grandchildren to add to his legacy. One of Ramon's favorite past times was attending every possible family gathering from holidays to birthdays, and everything in between. Our family has been blessed with many years of birthdays, pot lucks, and Laker games with his warmth filling up the room by his quiet smiles. His presence will sorely be missed and our lives will never be the same. Please join us in remembering Ramon Vicencio Jr., respected by many, cherished by all, a loving husband, caring brother, devoted father and darling grandfather. Viewing: Sunday, August 30, 2015 1:00PM - 9:00PM Dove release: 5:45PM Memorial service: 6:00PM