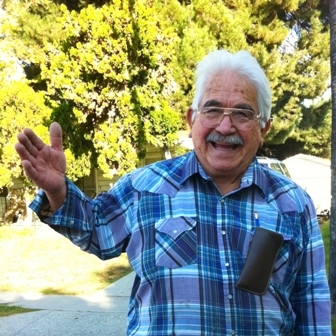 Ralph Fuentes Chasco, a 60 year resident of Los Angeles County, CA, passed away on Sunday, November 29, 2015 in Torrance, CA. Ralph was 83 when he died. The Service will be held at the chapel at Rice Mortuary on Thursday, December 3, 2015 at 2 p.m. A gathering of family and friends will follow in the Lighthouse Room until 5 p.m. On June 20, 1939, Carolina and Pascual Chasco brought Ralph Chasco into the world in El Paso, Texas. He was joined later by his two brothers and sister Raymond, Phil and Floranna. Eventually Ralph moved to San Pedro, California. At 17, he enlisted to the United States Marine Corps where he traveled the World. After his time in the military he worked as an Associate at Longren Aircraft Company where he became "Man of the Month" in October 1952. He went on to become a Master Welder at the Todd Shipyard until he retired. On October 16, 1954 he married Doris. Together they gave birth to two beautiful daughters, Dolores and Marie and three handsome sons, Ralph, Anthony and Louis. Ralph would see his children have children of their own and move on in their separate ways. His children went off to create wonderful lives filled with spouses and children. Ralph later met Mary and had a second chance at love. They married January 16, 1993 and his family grew to include Mary's eight children: Katherine, Robert, William, Johnny Jr., Manuel, Mary Frances, Patricia, and Raymond. Mary and Ralph lived in Harbor City, CA., growing old together. Ralph would spend hours in his garage crafting and creating beautiful pieces out of wood for those he loved. He put his heart and soul in every item that was brought to life in his hands. He enjoyed being surrounded by his loving grandchildren and great grandchildren. He always had a smile and joke for those he knew and those he just met. He had many stories that he will tell everyone and they would leave you with laughter in your heart and a smile on your face. Ralph also impacted many lives through youth sports volunteering his time coaching football for many years in the community. He will be fondly remembered as Coach Ralph will be remembered and missed by his large, loving family that includes five children and spouses, eight step-children, ten grandchildren, and nine great grandchildren. Donut eyes!