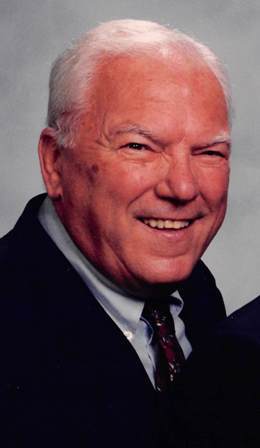 Ralph "Papa" Carretta passed away November 17, 2016 at home in Hermosa Beach surrounded by family. Born on May 26, 1927 in Pittsburgh, Pennsylvania, Ralph entered the U.S. Army immediately upon his 18th birthday. Ralph proudly served in the occupation forces in Germany from June 1945 through the end of 1946. Upon his return, he obtained his electrical engineering degree from the University of Pittsburgh on the G.I. Bill. He married Mary Rossi Carretta on October 7, 1950. The young couple moved to Los Angeles in 1951 for a career in the aerospace industry, and to the South Bay in 1954, first in Torrance, and later to Palos Verdes Estates in 1968 where he resided for over thirty years. Ralph and Mary together with their eldest son Steve owned and operated Palos Verdes Flowers in the Peninsula Center from 1980 until Mary's passing in 1996. The flower shop was home to many many local teenage employees and a source of pride for the family. Ralph is survived by his four children: Steve Carretta (Jamie) of Torrance; Mary Frances Vollucci (Steve) of Hermosa Beach; Tom Carretta (Kian) of North Oaks, Minnesota; and Annemarie Carretta Buchta (Rick) of Manhattan Beach; and thirteen grandchildren: Nick, John, and Joey Carretta; Ginamarie, Gian Carlo, Tomasina, and Angelina Vollucci; Samira, Tiana, and Arman Carretta; and Sammy, Bella, and Nicolas Buchta. He was preceded in death by his beloved wife of 46 years, Mary, and his brothers Donato and Richard. With his gentle nature and endearing smile, Papa will be missed by all.