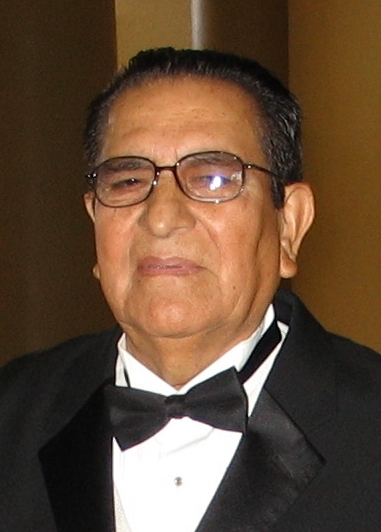 Porfirio Gutierrez July 11, 1925 - January 14, 2013 Porfirio Gutierrez, 87, passed away peacefully Monday January 14, 2013 at Providence Little Company of Mary Medical Center in Torrance, CA following a courageous battle with cancer. Born in Ocobamba, Peru in 1925 to Cirilo and Brigida Gutierrez, he was the oldest of six brothers and sisters. Seeking a better future than his small village offered, he left Ocobamba at a young age for the larger town of Ayacucho. Always ambitious, he ultimately made his was to Lima where he found work in a bicycle repair shop. After gaining valuable experience and two years of military service, he accepted a position at a second bicycle shop that offered greater opportunities. It was at this second shop that he met the beautiful Laida Uwate, the daughter of Japanese immigrants. He taught her how to ride a bicycle and as they spent time together, they became quite close. They were married October 12, 1951 in Lima, Peru. In 1955, he bought his own bicycle repair shop in the San Isidro area of Lima. He quickly gained a reputation for quality workmanship, honesty and dedicated customer service and by word of mouth only, his business grew. In 1965, the three bedroom house on the second floor above his shop became available and he was able to buy the property for his growing family. He spent the next 36 years living and working there and his little shop became a neighborhood fixture. Over the years, his customers included multiple generations of several families, various local and federal government officials, several Ambassadors from the United States, the Vice President of Peru and numerous other diplomats, dignitaries and business leaders. In 2001, he sold his shop, retired and moved to California to be closer to family, where many had immigrated to earilier. In 2007, he became a naturalized United States citizen, one of his proudest accomplishments. Porfirio is survived by his wife of 62 years, Laida of Hawthorne, CA; daughter Ada (Luis) Wong-Campos of Gilbert, AZ; son Freddy of Hawthorne, CA; son Felipe of Hawthorne CA; daughter Lorena (John) Grey of San Clemente, CA; daughter Yushy (John) Anderson of McKinney, TX; 7 grandchildren, Marcos, Luis-Felipe, Diego, Vanessa, Connor, Cole and Grace; brothers Santiago and Marcial of Lima, Peru; sisters Zenobia and Paulina of Lima, Peru and numerous nieces, nephews and relatives. He is preceded in death by his parents Cirilo and Brigida and sister Umbelina. Memorial services for Porfirio Gutierrez will be held Sunday, January 20th at 6:30 PM at Rice Mortuary, 5310 Torrance Blvd Torrance, CA 90503. Following the services, family and friends will gather to celebrate his life and honor his memory.