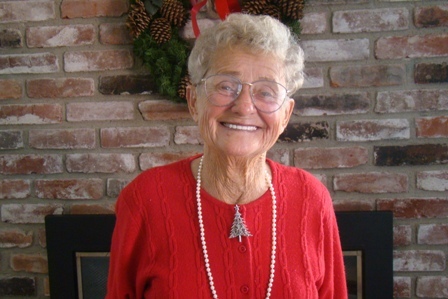 Pauline Dobson (nee-Skilevich) passed away peacefully during her sleep in Olympia, WA on May 2, 2014. She was eighty-two. A long-time Torrance resident, she was born on October 22, 1931 in Beaverdale, PA. A first-generation American, she was the fifth of six children. Baptized and raised in the Russian Orthodox faith, she received her public primary and secondary educations during the Depression and War years. She was a thespian and excellent student, graduating high school valedictorian. Coming west before her eighteenth birthday, she lived with her eldest sister Julia and secured employment as a file clerk in Los Angeles, CA. During this time she met and courted Robert Keith Dobson of Akeley, MN, an Army veteran six years her senior. They were married April 28, 1951 in Las Vegas, NV. Beginning a family together, they lived briefly in Redondo Beach, but soon settled in Torrance where they maintained a love-filled home for sixty-plus years. During her children's school years at Sepulveda Elementary, she was an active participant in the PTA, earning the honor of becoming a Lifetime Member for her service. She was a faithful member at two Redondo Beach Methodist churches, first with Saint Paul's United Methodist Church and in the later years with First United Methodist Church. She was actively involved in Shared Bread and United Methodist Women, as well as helping with many rummage sales and the church newsletter. Whatever was needed, Pauline was available and eager to help. Her real passion, however, was singing in the choir. Her love of song and beautiful soprano voice made her a fixture in the choirs for decades. Her natural love of life, generosity of spirit, and humble heart made her a life-long friend to many, and her empathy and compassion proved a source of comfort and succor to countless people during their times of sickness, loss, and sorrow. Blessed with indefatigable will and determination, she proved the consummate homemaker and mother. She became an excellent cook and was especially renowned for her scratch baking skills. The legend of her Christmas cookies has passed to succeeding generations. She fostered in her children respect for others and a vigorous self-reliance. Inculcating them with Christian values, she provided ceaselessly for their well-being and encouraged their spiritual, academic and artistic educations. Her love for them was unconditional. With her brood grown and moved away, she returned to work as bookkeeper/office manager of a local Union, retiring after fifteen years with a carpenter's pension. During their golden years, Pauline and Keith enjoyed travelling to Hawaii, Alaska and Switzerland. Visits to see their grandchildren provided happy memories. Visits to Grandma's house usually meant a trip to Disneyland, one of her favorite places, especially the Alice in Wonderland Teacups! She enjoyed casino trips with her friends and for years had season tickets to local live musical and theatrical performances. She was especially fond of basking in the warm sunshine. Following the loss of her husband in August, 2011 she moved to Lacey, WA to live with her youngest son and his family. Cascading medical issues required her entering a memory-care facility in Olympia, WA in late 2012, where she remained until her passing. She is survived by all her children: Col. Robert K. Dobson, Jr., USMC (retired) of Fredericksburg, VA; Shirley A. Kopp of Austin, TX; Richard A. Dobson of El Sobrante, CA; Raymond L. Dobson of Lacey, WA, eight grandchildren and one great-grandchild. Each will carry her cherished memory forward. A memorial service and celebration of Pauline's life will be held at 2:00 pm on Thursday May 15, 2014 at First United Methodist Church, 243 S. Broadway, Redondo Beach, with a reception immediately following. As it was her favorite color, the wearing of blue is encouraged. Interment will be private.