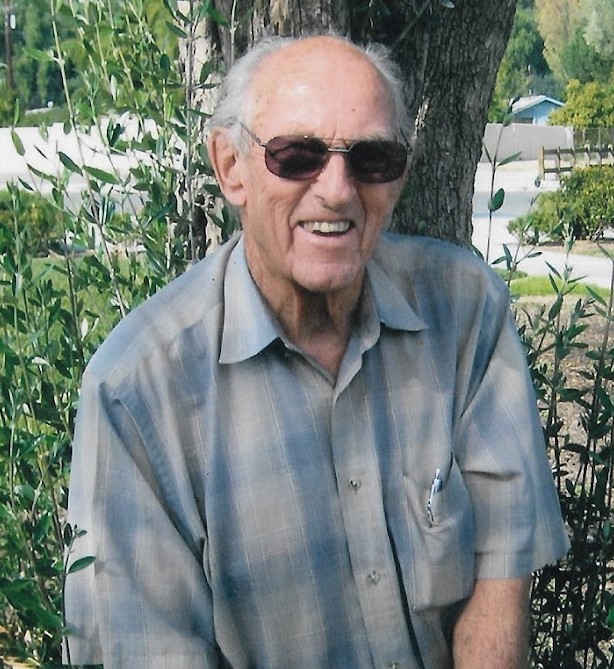 Paul passed peacefully into the arms of his saviour in his long-time home with his beloved caregivers Irma and Chris at his side.

He was predeceased by his wife Dora (Didier), brothers Richard, Laurence and Jerold and brothers-in-law John and Raymond Didier and sister-in-law Betty Stapley Culham. He is survived by nephews Clarke (Adele) of Calgary, Alberta, and Boyd (Holly) of Halifax, Nova Scotia, Roger Stapley (Norma) of Baden, Ontario, Robert Didier (Joan) of Juneau, Alaska, and niece Marilyn Hunter (England) and many grand nephews and grand nieces.

Paul was born in Olds, Alberta to parents Harold and Lizzie and grew up in Olds and Nanton, Alberta. He farmed in Lomond, Alberta for 12 years following high school and then moved to Inglewood CA to marry Dora, originally from Nanton, pursuing a career in real estate.

Paul and Dora travelled to many parts of the world and returned often to visit family and friends in Nanton and Parkland, Alberta. They played a big part in the life and work of University Christian Church in Inglewood. Paul was a valued member for over 50 years.  He served as an Elder, a Deacon, a Missions Committee Member, and was faithfully involved in Bible study small groups for many years. He kept in contact with various missionaries and he and Dora often opened their home to them when they were in the Los Angeles area.

Paul enjoyed developing relationships with people and provided his own pastoral care fellowship ministry for those who were ill or going through difficult times.  He also kept track of the birthdays and anniversaries of many friends and called regularly to express his interest, care, and concern. He had many friends including his 7 adoptive daughters who loved him like a father.

Physical limitations did not limit his faithful attendance at worship services and other events at University Christian Church.  He made a determined effort to be as active and informed as he could be.  He was a good example to others and his presence will be dearly missed. Paul and Dora were also active at the Nanton Church of Christ when visiting Alberta.

Following Dora’s passing, Paul travelled to Nova Scotia and Ontario where his visits were enjoyed immensely by Boyd & Holly and Family and Roger and Norma Stapley.

Paul was a kind, gentle and caring man with a great sense of humour and a love of learning.  He was a noted early adopter of technology, and an avid photographer. He took up stained glass creation (introduced to the art by Roger) in his latter years and learned how to use a computer so he could stay in touch with his many friends and relatives. E-mails and phone calls and his fellowship ministry continued to the end of his life. Family and friends have fond memories and great appreciation for his mental acuity and kind and caring soul.

A Memorial service was held at Paul’s home (due to Covid-19 restrictions) on March 3, 2021.  A picture video of his life was presented on a large screen TV followed by a service conducted by Pastor Perry Fuller which included many tributes and stories of Paul. The service was attended by over 20 neighbors, friends and Paul’s close church brothers and sisters.  An internment service in Nanton will be held at a later date.

Donations in remembrance of Paul may be made to University Christian Church or Nanton Church of Christ.