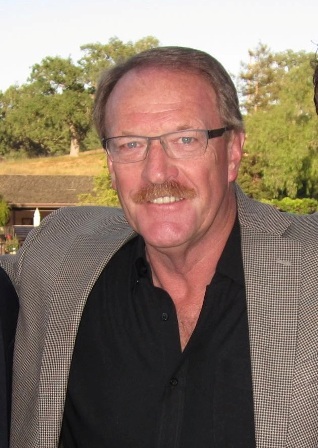 Paul Martin Engle entered into life on February 20, 1948, and entered unexpectedly into eternity November 5, 2015. Paul, the third son of Ed and Betty Engle, grew up and spent most of his life in the South Bay. He graduated from Mira Costa High School in 1966 where he shined on the football field. He went on to El Camino College where he continued to excel in football and earned a scholarship to play for San Jose State University. After graduating with a degree in business administration, he returned to the South Bay and started a career in sales. He eventually followed in the footsteps of his father, Ed, and found his way into the floor covering business. Paul's natural engaging personality and hard work ethic allowed him to climb up the corporate ladder, eventually becoming Vice President of Sales and Marketing in carpet manufacturing for 38 years. In 1984 he married the love of his life, Mary Lorenz. Together they raised their three beautiful daughters Kelly (31), Whitney (29), and Jamie (26). After moving to Palos Verdes in 1995, Paul became active in the Palos Verdes Breakfast Club and served as president in 2003. He became an integral part of the club's acting troop "The Brandoliers" playing a number of roles from Marilyn Monroe to General Patton at their annual extravaganza "The Rowdy-O." Paul's other main social passion was following San Jose State Football. He and several of his former San Jose teammates formed an alumni group and they would travel to the Bay Area to cheer on the Spartans. They traveled to all of the home games, some of the away games and hosted BBQ's for the team during spring training. He was a devoted husband to Mary, a loving and affectionate father to Kelly, Whitney and Jamie, a proud father-in-law to Mike, Matt and Aaron and an even prouder grandfather to baby Grayson Mary. Paul is also survived by his brothers Phil (Dru) and Gene (Teri); nieces Heidi (Mark) and Krista (David), and nephew Matthew (Tara) and 5 great nieces, as well as hundreds of friends from all over the South Bay. Paul was also a huge animal lover and leaves behind his 3 rescue dogs Rusty, Lulu and Oliver. Though he may be gone physically, his spirit will live on in the countless lives he touched and changed forever. A memorial will be held Tuesday, November 17th at 1PM at The Neighborhood Church in Palos Verdes. The family asks in lieu of flowers contributions can be made in Paul's name to Love Leo Rescue (1908 12th Street, Unit 2, Santa Monica, CA 90404) or The Spartan Foundation (1 Washington Square, San Jose, CA 95192).