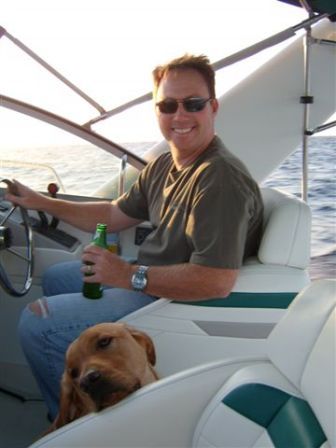 Patrick Martin Walsh September 9, 1968 – December 13, 2014 Patrick Martin Walsh ("Pat" or "Paddy"), 46, a life-long resident of Southern California, passed away on Saturday December 13, 2014 after a courageous 21-month battle with Sarcoma, a rare form of cancer. Patrick was born in Arcadia, CA on September 9, 1968 to Martin and Patricia Walsh. He graduated from Chaminade College Preparatory High School in West Hills, CA, and attended both California State University – Northridge and the University of California – Santa Barbara. Throughout his career, Patrick owned and operated a number of small businesses, and often said one of his proudest accomplishments was that he "never had a boss." Patrick was an avid boater, scuba diver and water skier, but his absolute favorite activity was spending time relaxing on his boat at Two Harbors, Catalina Island with his wife and his beloved red Labrador, Killian. In addition to his affinity for water sports, Patrick also enjoyed snow skiing, traveling and "tinkering" on anything that had a motor. He had an extensive knowledge of automobiles and could often identify a rare make and model vehicle just by the sound of the engine. Patrick is survived by his wife, Denise Johnson Walsh, of Palos Verdes Estates, CA; parents, Martin and Patricia Walsh of Camarillo, CA; brother, Stephen Walsh (wife, Edithe) of Thousand Oaks, CA; brother, Brian Walsh (wife, Lori) of Alpharetta, GA; brother, David Walsh (wife, Monica; nephew, Alexander and niece, Katherine) of San Marino, CA; sister, Kathleen Walsh Cera of Camarillo, CA; in-laws, Dennis and Elizabeth Johnson of Charlotte, NC; and brother-in-law, Matthew Johnson (wife, Holly; nephew, Cole and niece, Charlize) of Charlotte, NC. Patrick was a friend to everyone, and never turned away a person in need. And he never passed up an opportunity for philanthropy, most recently contributing to pet rescues and serving on the Board of Directors at the Cancer Support Community of Redondo Beach. He encouraged people to "dream big" (as he did), and reach for the stars. He lived every day to the fullest, and refused to let the disease he battled, nor the physical challenges faced from numerous treatments, define or limit him. He was an inspiration to all he met, including other cancer patients, and he will be missed tremendously. A Funeral Mass will be held at St. John Fisher Catholic Church in Rancho Palos Verdes on Wednesday December 17, 2014 at 11am. In lieu of flowers, donations in Patrick's memory may be made to the Cancer Support Community of Redondo Beach (www.cancersupportredondobeach.org).