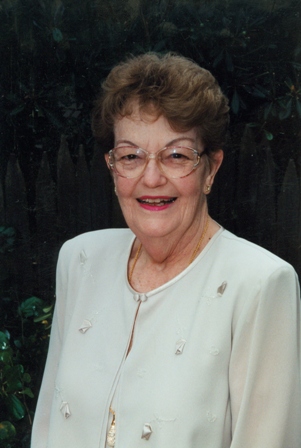 Patricia Ternstrom passed away on June 20, 2012 at the age of 86 after a long battle with emphysema. Pat was preceded in death by her daughter, Stacey Lynne Corzine, her sister, Georgia Beall Hand and her brother, Bill Holmes. She is survived by her loving husband of 49 years, Bert; her three children, Pam (Gordon) Almond, John (Karen) Corzine and Jeff (Suzy) Corzine; her nine grandchildren, Laura, Tom, Melissa, Mike, JJ, Travis, David, Nikki and Samantha; and her nine great grandchildren Jacob, Lily Grace, Elizabeth (Bitsy), Olivia (Livvie), Benjamin, James, Austin, Darian (Tammy's daughter) and Hayley (Michelle's daughter). She would also have wanted to recognize the many relatives whose names have not been included here but who were most dearly loved. Pat was diagnosed with emphysema in the early 1990's. After receiving that diagnosis, she began to participate in various research projects through the Harbor UCLA-Rehab Clinical Trials Center. Her involvement in that research led to positive results both for Pat and for future emphysema/COPD sufferers. She was very proud to be part of the research group that identified the positive results of Spiriva and other drugs in the treatment of COPD. She was also first in line to test new exercise programs developed by the Rehab Center. When speaking as a COPD sufferer, she was able to emphasize to various media the importance of rehab and of the research going on at the Center. She worked with amazing people during this time. Pat's family wishes to express appreciation and love to all those individuals who helped her stay with us longer. She fought her battle against COPD with courage, an infectious laugh and a smiling face. She never allowed the disease to control her; she lived every day as if there would always be a tomorrow. Pat was a lifetime bridge player and also loved a great poker hand. Her morning crossword puzzle was a perfect way to begin each day. She remained involved with her Beverly Hills High School Alumni Association, was a member of Las Madrecitas and was proud to be a charter member of DAR for 45 years. In her 40th year, she was honored with a Certificate of Membership and a membership pin by both the local Point Vicente and National chapters. She always loved to travel but did not discover 'cruising' until her early 60's. It quickly became her favorite way to see the world. She and Bert went on numerous cruises to exotic locations such as Greece, the Mediterranean, Brazil, the Panama Canal, Russia and the Scandinavian countries. She also made many trips to Mexico, Hawaii and Alaska. In addition, she saw Canada from coast to coast, 'cruising' by train. Pat's greatest passion was her family. She lived long enough to know her grandchildren and spent time with some of her great grandchildren. She was the core, the matriarch, the catalyst that kept the family together. She knew what wonderful things she had been able to accomplish in her lifetime, but loving her family was what defined her. To honor her memory there was a Celebration of Life Open House on Saturday, August 11 from 11:30 – 3:30 at the Admiral Risty Restaurant , 31250 Palos Verdes Dr. West, Rancho Palos Verdes, CA, 90274. In lieu of flowers, the family suggests donations be sent to Pulmonary Education and Research Foundation (PERF), P.O. Box 1133, Lomita, CA, 90717 in Pat's name.