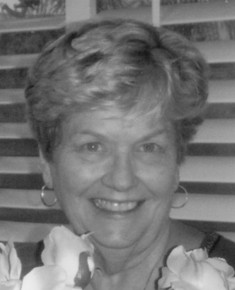 Patricia Joan (Stonebraker) Martin passed away Tuesday, December 4, 2012 at her home in Murrieta, CA. She was born in Torrance, CA on April 9, 1938 to James Ottis and Mary Lou (Maxwell) Stonebraker. She attended school in Hawthorne, CA graduating from Hawthorne High School on June 14, 1956. She married Harold Neal Martin on July 8, 1956 in Los Angeles, CA. They raised a son, Mike, and a daughter, Susie Q in Hawthorne, CA. She followed in her mother's footsteps to become a Beautician working in the family business. Pat and her Mom worked at Mary's Beauty Shop while her Dad and uncle worked at Ronnie's Barber Shop in the same building. Her uncle, Ronald George Stonebraker, lived with the family and was like a second father to her. She retired after 25 years. She was a charter member of the Hawthorne Emblem Club and volunteered for numerous community projects including production of each edition of the Emblem Club's Newsletter. In 2000, she and Harold moved from Hawthorne to Murrieta, CA to be closer to their only grandchild, Skylar. She was predeceased by her parents and her husband, Harold, along with her big brother, Kenneth Ronald Stonebraker. She is survived by her son, Michael N. Martin (Tami), her daughter, Susan D. Martin (Marsha), her granddaughter, Skylar A. Martin, along with 14 nieces and nephews and countless friends. Graveside services will be held Monday, December 17, 2012, 1:00 pm at Inglewood Park Cemetery, 720 E. Florence, Inglewood, CA 90301 (use Manchester entrance) - El Sereno Plot. A luncheon reception will follow the service at McCormick Mortuary, 635 S. Prairie Ave, Inglewood, CA 90301. Favorite charities include Habitat for Humanity and St. Jude.