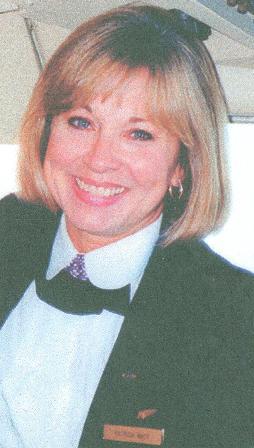 Patricia Freeman Mack passed away August 20, 2014, from complications of surgery. She was born February 28, 1944, in Decatur, Illinois, to James and Betty Condon Freeman. Her father was granted a one-week leave from the Navy to see his wife and first-born child before he returned to military duty. According to her Uncle David, during the war years, she never touched the floor and was the center of all affection. Pat was Freshman Homecoming royalty at Eisenhower High School in Decatur. The e family then moved to Phoenix, Arizona, in 1959, and she attended North High School. She attended Arizona State University and was a member of Chi Omega sorority and Kaydettes. She became an AA flight attendant in 1964 and soon moved to "the most perfect place in the world," Manhattan Beach. She married Jim Williams and had her two beloved sons, David (deceased) and Ted. Back in the day, stewardesses (as they were called then) were terminated for pregnancy. She returned to school and became a Registered Nurse. She worked at Kaiser for several years. Though she continued to have a passion for medicine, a class action law suit allowed her to return to the airline as a "returning mother." She married Lowell Mack, a pilot, and enjoyed many years flying with him to and from Hawaii. She continued with American Airlines until her retirement in 2004. She was a volunteer at Little Company of Mary, Meals on Wheels, and Walk with Sally. She was a member of Kiwis and The Eating Team. Her passions was (whoops! "were") her love of grammar, reading, medicine, laughter and makeup. She had a way of charming everyone. Her motto was "Never pass up the chance to give a compliment." Her highest callings were mother, daughter, sister, aunt and friend. She was predeceased by her precious son, David, her husband, Lowell Mack, brother, James Freeman, mother, Betty Freeman, who was lovingly cared for by Pat in her final years, and father James Freeman. She is survived by her son, Ted Williams of Forest Ranch, CA, and his father, James Williams; her sisters, Mary Zimmerman (Michael) of Chandler, AZ, and Kitty Courtney (Danny) of Scottsdale, AZ; their children Scott (Amy) Zimmerman of Houston, TX, Christine (Peter) Schubert of Maricopa, AZ, Corinne (Avi) Shtayer and Kathryn (Chris) Glasgow, all of Scottsdale, AZ; and the little ones, Gehrig, Annie and Adelynn Zimmerman, Brenley and Courtney Glasgow and David Shtayer. Services: August 30, 2014, 11 a.m., at the Proud Bird, 11022 Aviation Boulevard, Los Angeles, CA 90045, in the Red Baron room. Donations lovingly accepted to "Wings Foundation," a charity to help ill and injured Flight Attendants, care of Anne Elwell, 6310 Terracina, Alta Loma, CA 91737