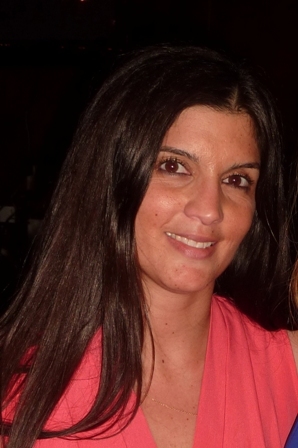 Patricia Christine Ballas September 11, 1980 to March 3, 2017 Our beloved Patti passed away peacefully surrounded by family and friends. Her sudden death was caused by a cerebral hemorrhage. Patricia Christine Ballas was born September 11, 1980 to Andrea and Peter Ballas, delivered by dear family friend, Dr. Frank G. Nicholas. She was baptized at Saint Sophia Cathedral with her cousin Adriana by godparents Tina and Steve Callas. Her toddler and pre-school years were spent having fun with cousins, attending ballet and mommy and me classes. Patti's elementary school years were occupied with Girl Scouts, piano lessons and serving as Hickory School Historian. Her 4th grade science project "Cookie Chemistry" with Yiayia Georgia's assistance, took first place. As a fifth grader, Patti and her kindergarten brother, Billy, performed "Brother For Sale" in the annual school talent show. During middle school a beading class sparked Patti's creativity and talent. She started "Patti's Pretties" selling her beaded creations at boutiques, craft shows and to her mom's friends. Her work was so well received that people came to her with many special orders. As a result of her business success, Patti won a scholarship to an entrepreneur camp for girls. After graduating from Torrance High, Patti attended El Camino College, enjoying a summer program in Europe. She continued her studies at Loyola Marymount University where she received a bachelor's degree. During high school and college she worked for six years in market research for a computer game firm. After graduating, she was hired as a tax administrator for a Century City CPA firm where she worked for twelve years. A dedicated hard-working employee, Patti was well-respected by her co-workers. Last November she was recruited as the Operations Manager for a newly formed CPA and Business Consulting Firm in Beverly Hills. Patti grew up in the Orthodox faith at Saint Katherine Greek Orthodox Church. While participating in Sunday School, GOYA, Greek Dance, Oratorical Festival and Bible Bowl she made many life-long friends. She modeled for Philoptochos fashion shows, attended Saint Sophia Camp, and was presented at the 1999 Saint Sophia Debutante Ball. Patti has had a close relationship with her cousins. She loved trips to Sea World and Disneyland with Yiayia Georgia, Adriana, Joanna and Billy, as well as trips to visit Uncle George and cousin Troy at their Sonoma County ranch. With Yiayia Zoe, Papou Bill and the Ballas cousins: Stephanie, Katharine, Christina, Mikey, Tommy, and Tessa, she enjoyed many trips to the desert and Mandalay Beach Resort. A highlight was the trip to Hawaii to celebrate Yiayia and Papou Ballas' 50th Wedding Anniversary. Patti's famly was blessed to have the opportunity to travel to Greece in 2006 for the wedding of Aunt Kathy to Peter in Soudena and in 2011 for Godsister, Alexandria Ingraham's wedding to Perrin Rausch in Kefalonia. Just last summer, Andrea, Peter, Patti, Alex, Billy and Sarah spent two wonderful weeks in Greece, returning to Soudena and enjoying the island of Paros. With Alex, her boyfriend of the last three years, came new adventures for Patti. She formed new friendships, attended many social events, and Alex introduced Patti to his passion for camping, hiking and the outdoors. Patti was thoughtful, kind-hearted, generous and loving to all. She was known for her heartfelt cards, writing the best thank you notes and finding the "perfect" gifts, always presenting them beautifully wrapped. Patti loved purple and green, shopping, finding a bargain, Hello Kitty, Barbie dolls, babies, house music, her cousins, friends and family. She is survived by her parents, Andrea and Peter; brother, Billy and his fiancé Sarah; half sister, Marie, Yiayia Georgia Vasila, many aunts, uncles, cousins, nieces and nephews. Trisagion service on Tuesday, March 7, 2017 at 7 pm and funeral on Wednesday, March 8, 2017 at 10:30 am. Both services at Saint Katherine Greek Orthodox Church, 722 Knob Hill Avenue, Redondo Beach, CA 90277. Donations in Patti's memory may be made to Saint Katherine's Building Fund. She will remain in Our Hearts Forever May Her Memory be Eternal