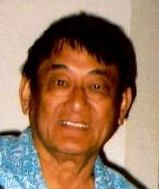 Orlando Leonard Igarta, a long-time resident of Carson, California, passed away on February 28, 2013, at the age of 77. He was a loving husband, a caring father, and the best grandfather and great-grandfather a child could ever have. He was also a dear brother, a funny uncle, and a loyal friend. Preceded in death by his parents Agnes and Benito Igarta, Orlando is survived by his wife Mevelyn, daughters Jan Grotegut of Mapleton, Utah and Leila Jones of Carson, California; and sons Sean Igarta of Downey, California and Anthony Borchers of Norfolk, Nebraska. Orlando, lovingly known by his mo'opuna as "Papa," is survived by his eleven grandchildren, Kyle, Kendall, Austin, Ariel, Shane, Eric, Micah, Logan, Marissa, Luke, Joshua, and four great-grandchildren T.K., Parks, Cruz, and our little Maria Kamalani who was named by Papa and born on the day after he passed. Born in Wailuku, Maui, Orlando was the fifth child of ten in this big Filipino, Chinese, Hawaiian family. He loved to go back home with his wife Mev, which they did quite often. There they would visit with family, rest, relax, and go to the beach to gather limu. In his retirement from TWA/American Airlines, Orlando cared for his impeccable lawn and made time for meaningful conversations with surrounding neighbors. He also played ukulele with his many friends during the week and also carved ipu, an art form of Hawaiian heritage. Having recently returned from a two-week Tahitian cruise, Orlando and Mev were seasoned world travelers. They would go on trips and cruises with their friends, bringing home with them a lifetime of memories. On Sundays, however, he and Mev would make time for church, and looked forward to meeting up with the breakfast group. Everybody loved Orlando, and looked forward to the many gatherings at his home. Orlando also served his country as an enlisted member of the United States Army. He will be missed by all, and when we are finally able to wipe our tears away, we will remember the good times with the great man, Orlando Igarta. Mass will be held at St. Philomena Church at 21900 South Main Street in Carson, California, on March 23, 2013 at 1:30 p.m., "aloha attire".