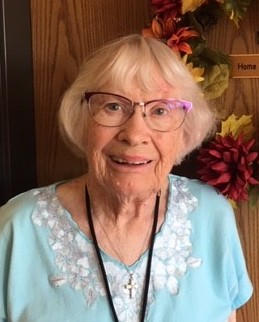 With a sad heart, the family of Olive Irene Pine announces her passing on Thursday, January 24, 2019. Olive Irene (Johnson) Turgeon Pine was born on December 25, 1928, at home near the small town of Burke, SD to Charles and Olive (Fish) Johnson. She was the seventh of nine children. She grew up on the family farm and attended country school. Later, she went to Burke High School and lived in town during the week. After graduating in 1946, she received a teaching certificate from Wayne State College in NE. She taught in a one-room schoolhouse for two years before marrying George Turgeon. Irene met George at a dance and the two were married on June 30, 1948. Four children were born before they packed up and followed her two sisters west to California in 1956. They chose a spot in Torrance not far from the ocean. A fifth child arrived a little later, and Irene worked hard as a devoted mother and wife. She was a good seamstress and excellent baker. Unfortunately, George passed away unexpectedly in 1964, leaving Irene a widow with five children at the age of 35. About four years later, Irene met another man at a dance and a few months after, she wed Louis “Pat” Pine on December 17, 1968. A daughter was born the following year. The family continued to make trips back to the Midwest, adding Pat’s home state Illinois to the itinerary. The two loved traveling, especially by car. And when they weren’t traveling, they attended the community college travelogue, watching films of places all around the world. After Pat retired, they enjoyed their vacations in their motor home. Irene loved visiting and staying with their many relatives and friends. Irene always kept very busy. She worked away from home for a while when she was widowed and then many years later as a substitute clerk typist for the Torrance school district. She was a member of St. James Church in Redondo Beach and was involved with the Sunday hospitality, Catholic Juniorettes, Mission Circle, and Catholic Golden Age. Irene enjoyed spending time outside in her yard, tending to her many flowers, as well as going for walks and visiting with her neighbors. She liked shopping, especially for a good deal, at Penney’s, thrift, and antique stores. Irene was always up for a get-together with her children, grandchildren, and great grandchildren. She loved hosting and having everyone together. After Pat’s death in 2015, Irene continued living in her home for a couple years. In November of 2017 she moved to a senior independent living home in San Luis Obispo where she could be close to two of her daughters. Unfortunately, she had a couple falls as well as pneumonia and congestive heart failure. Irene did not suffer as she passed peacefully in her sleep. Surviving are her six children: Dennis Turgeon of Catalina Island, CA; Janice (Byron) Hines of Avon, IN; Barbara (Charlie Barks) Sandgren of Las Cruces, NM; Debra (Michael) Carroll of Riverside, CA; Vicki Foster of Los Osos, CA; and Patricia (Allen Shipman) Pine-Shipman of Paso Robles, CA. Irene also leaves 13 grandchildren and 15 great grandchildren: a brother George Johnson of Gregory, SD and two sisters Marjorie Swift of Kadoka, SD and Luella Frey of Moscow, ID. Irene was preceded in death by her husbands George Turgeon and Louis Pine; one sister, and four brothers. A funeral mass will be held on Friday, February 15, at 10:00 AM at St. James Catholic Church located at 415 Vincent Street, Redondo Beach, CA 90277. An inurnment will take place the preceding day at the Riverside National Cemetery. Donations may be made online to Operation Smile.