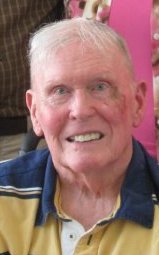 Normand L. Olson Norm Olson, 82, passed away on December 17, 2014, at The Canterbury Care Center in Rancho Palos Verdes. He is survived by his wife Ernestine (Tina); daughter Stacy (Jeff); grandchildren Sebastian and Catalina; his nephew Tom; and nieces Martha, Katy and Kirsten. Norm was a beloved teacher and coach for 35 years at Torrance Elementary and at JH Hull Middle School. His basketball players affectionately called him "Mr. O". Norm served as a First Lieutenant in The United States Air Force after graduating from the University of Montana in Missoula, Montana. He was an avid trout fisherman and spent many summers fishing in Missoula where he and his wife lived after his retirement. Memorial Services and interment of ashes will be held 1:00 PM, January 25, at First Lutheran Church, 2900 W. Carson Street, Torrance, 90503, with a reception to follow. In lieu of flowers, the family asks donations be made to First Lutheran Church, Faith Hall.