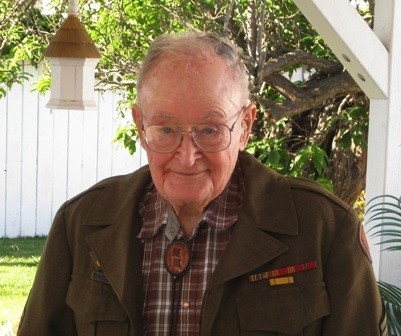 Norman Charles Kaper May 30, 1919 – May 26, 2014 Our beloved father, grandfather, and soon to be great-grandfather, uncle and all around great guy and friend that was loved by many passed away at his home in Westchester after suffering a stroke, where he resided since 1952. He was born in Center Township, Lake County, Indiana on May 30, 1919 to Charles and Emma Kaper. He graduated from Crown Point High School and went on to earn a bachelor's degree from the University of Chicago after returning home from serving in the Army Air Corp during WWII and later went on to the University of Southern California to work towards his masters. He was a WWII veteran, who served in North Africa, Italy and was a Pearl Harbor volunteer. He was awarded the Bronze Star for saving lives by rerouting our bombers away from enemy artillery sites. He entered the insurance field shortly after graduating from college and worked for many insurance agencies until starting his own insurance agency, Tryways Insurance Agency, where he was quite successful. Norman was happily married to Myrtle L. Johnson for 53 years, who he met at the USO Club in Inglewood, CA prior to shipping off to war in early 1942. They were married in Inglewood, CA in 1945 and were world travelers up until the time of Myrtle's passing in 1999. He called her his "go-go girl" as they were always traveling. He is survived by son, John Kaper and his wife Patricia Gebert-Kaper; daughter, Kathleen Richardson; grand-daughters, Stacy Kaper and her husband Adam Durand, Marina Richardson and Annika Gebert. Norman was the kind of person that everyone enjoyed having met, his sense of humor, his positive attitude and love of life was infectious. His practical jokes, storytelling, love of sports, singing, his home-made birthday cards with witty sayings will be greatly missed, but he will be forever in his hearts. Norman is laid to rest beside his loving wife at Holy Cross Cemetery in Los Angeles. A memorial service will be held on Saturday, June 21, 2014 at 11:00 am at Westchester Methodist Church in Westchester at 8065 Emerson Avenue, Los Angeles, CA 90045, reception to follow.