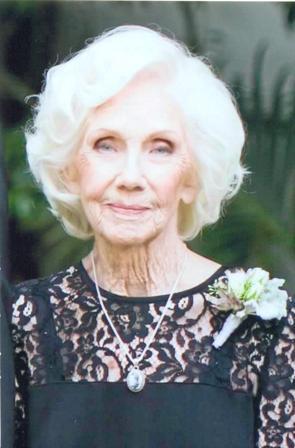 Norma Louise Maddock, 81, passed away in the comfort of her home on Friday, January 22, 2016 surrounded by family. She was born July 21, 1934 in Independence, Missouri, to the late Archie Howard Leas and Mildred Elizabeth Blakley-Leas. They lived on a 360 acre farm where they raised chickens and grew corn. They also had horses, pigs and two lovable terriers named Salty & Peppy. Norma, her mother and brother moved to Fontana, California after her father passed away when she was about 8 years old. She attended Banning High School in Wilmington and was a resident of the south bay area for over 60 years. Norma was a mother of four and worked very hard to support her family, often holding down more than one job at a time. She spent around 6 years working at Pucci's/Adre's in Torrance, 18 years at Torrance and South High Schools, and 20 years working with Nar-Anon. After retiring from the Torrance School District she continued to work part time as a secretary for Nar-Anon up until just a few months prior to her death. She enjoyed watching The Price is Right, Family Feud, and Wheel of Fortune. She was a huge Peanuts fan. She also enjoyed spending time with her friends and attending church events, and spending quality time with her family and her beloved dogs Chloe and Patrick. Norma was very proud of her children and their spouses. She loved sharing pictures and stories of her children, grandchildren, and great grandchildren. Norma was a cheerful and loving woman who was full of life and made friends where ever she went. She was a strong woman who took pride in herself and didn't rely on anyone to take care of her. She was always well put together and greeted everyone with a smile. Norma was a true friend; she had a great memory and knew the people that she came across in her daily life by name. Norma is survived by her brother Eugene Cunningham, ex-husband Ernest Benton, three of her four children - Kara (Rick) Sullivan of Orange, CA, Ron Adams of San Bernardino, CA, and Kathy (Dave) Adams-Sulek of Fort Loudon, PA; 13 grandchildren - Matt Sullivan, Blake Sullivan, Kari Johnson, Chaz Adams, Brittany Monroe, Sierra Adams, Breea Sampson, Summer Krumme, Timothy Panter, Jeremy Powers, Aaron Panter, Kyle Panter, Kaitlyn Panter; 10 great-grandchildren - Mackenzie, Emily, Kaden, Kylee, Tanner, Kambree, Blake, Taylor, Ava & Paisley. Any discussion of family would be incomplete without mention of her surrogate nieces and nephews the Worthey's (Dorinda, Susan, Bill, Dedee and Brett) as a result of her lifelong friendship with their mother Jewel. She is preceded in death by her parents, husbands Ron Adams and Ray Maddock, and her son Larry Adams. Norma will be laid to rest on Monday, February 1st at Forest Lawn Cemetery in Cypress California alongside her beloved son Larry. May she rest in peace. Visitation will be from 1-5:00 p.m. Sunday, January 31, 2016 at Rice Mortuary in Torrance, CA. Funeral Services will be held at noon Monday, February 1, 2016 at First Lutheran Church in Torrance, CA . A graveside service will follow at 3:00 p.m. at Forest Lawn Cemetery in Cypress, CA.