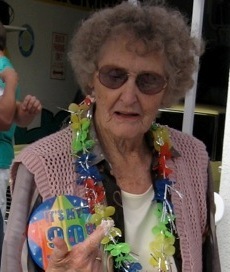 Nellie Vida Dennett Prescott of Lawndale, passed away on the evening of January 17, 2015 surrounded by her two loving daughters. Nellie was born July 6, 1920 to John and Melinda Dennett of Springdale, Utah. She and her nine brothers and sisters were raised in a two-room log cabin in the Zion national mountains. She quit school at a young age to work. At the age of 18, she met and married Marvell Prescott in Park City Utah, though they made their way to California soon after. Nellie loved the weather here and the young couple spent many nights walking to the Venice and Ocean Park piers, where they danced to the big band music they loved. They were soon the parents of two girls and a little boy. In 1952 they bought a house in Lawndale that Nellie lived in for the rest of her life. She and her husband worked for McCullough chainsaws near the LA Airport. In 1981, her husband died suddenly from a heart attack, but Nellie continued on with a focus on her children and later grandchildren. Nellie loved to have the children visit and take care of them. She is the grandmother of eight and great grandmother of twenty-four and great great grandmother of five. Nellie is survived by her Daughters Carolyn, Gloria and Son Douglas. Funeral services will be held at 12 noon Saturday January 24, 2015 at the LDS Chapel on 14801 Osage Ave, Lawndale, CA 90266. Friends of Nellie and her family are invited to attend.