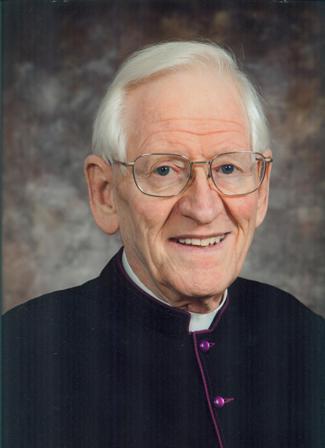 Reverend Monsignor John F. O'Byrne 01/29/1935 - 01/27/2016 Reverend Monsignor John Francis O'Byrne, Pastor Emeritus of St. Catherine Laboure Church, Torrance, went to Glory Wednesday, January 27, 2016. Monsignor was born on January 29, 1935, (the Feast of St. Francis de Sales), on the family farm in Grange, County Tipperary, Ireland, the second-born son of Kathleen (Murphy) and James O'Byrne. His father passed away before Monsignor was five years old, leaving his mother to raise three young children. Monsignor O'Byrne served St. Catherine Laboure Church in Torrance for 36 years 1976-2012, first as an Associate and then as Pastor for 26 years until his retirement. He was designated Chaplain of His Holiness Pope Benedict XVI in 2005. Fr. O'Byrne attended St. John's Seminary in Waterford, Ireland 1954-1961 and was ordained to the Sacred Priesthood for the Archdiocese of Los Angeles on June 18, 1961. He served at St. Jane Frances, N. Hollywood (1961-1963), St. Lawrence Martyr, Redondo Beach (1963-1965), Immaculate Conception, Monrovia (1965-1966), Mission San Juan Capistrano, (1966-1968), Nativity, Torrance, (1968-1972), Precious Blood, Los Angeles, (1972), St. Anthony of Padua, Gardena, (1972-1976), and St. Catherine Laboure, Torrance, since 1976. Monsignor John O'Byrne had a charismatic, witty, mischievous personality, and a twinkle in his eye. He was loved and remembered by everyone who met him for his great sense of humor, love, and compassion, standing beside folks in the highlights and the struggles of their lives. One friend of many years told Monsignor: "If you were ordained a priest for me, just one person, it has been worth it all. For decades you have shown me to trust God. You reflect the very Compassion of Christ." Since childhood, Monsignor O'Byrne suffered through numerous obstacles with his health, never complaining and pressing onwards, grateful to his doctors and the medical profession, writing prayers in Thanksgiving on their behalf. He has often spoken of his mother as the most influential example in his life, so young and courageous, raising three small children alone during the War years. On Monday, February 8, the Visitation begins at 3pm, with the Rosary Vigil at 7pm at St. Catherine Laboure Catholic Church, 3846 Redondo Beach Blvd., Torrance. On Tuesday, February 9, the Funeral Mass begins at 11am at St. Catherine Laboure Church, followed by Burial at Holy Cross Cemetery, Culver City, and a Reception at St. Catherine Laboure Parish Hall. Monsignor John O'Byrne was preceded in death by his parents Kathleen and James and sister-in-law Peggy. He is survived by his next of kin Jeannie O'Byrne and his cat Mac, and in Ireland by his brother Michael, his sister Sr. Anne O'Byrne, R.G.S., and niece Anne Marie Kelly and family, and many Murphy, O'Donnell, O'Byrne relatives and friends. In lieu of flowers, donations in memory of Monsignor John F. O'Byrne may be made to the Neuroendocine Tumor Research Foundation, 20 Park plaza, Suite 478, Boston, MA 02116, https://netrf.org ; or Healing NETS, 817 3rd Ave. N. #306, Nashville, TN 37201, www.thehealingnet.org.