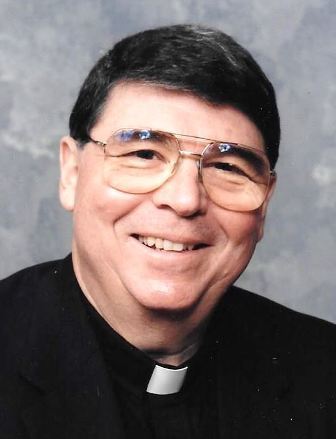 Msgr. Alexander C. George passed into eternal life on April 17, 2017. He was born on May 3, 1930 in Buffalo, NY, the eldest of six children. He attended St. Monica High School, Santa Monica, and Loyola University. He served in the U.S. Air Force for three years, during the Korean War. Subsequent to his time in the Air Force, he entered St. John's Seminary, Carmarillo, and was ordained to the priesthood on May 1, 1965 at St. Vibiana's Cathedral in Los Angeles. Msgr. George served at Mary Star of the Sea in San Pedro and St. Agatha parish in Los Angeles, before going to Christ the King as associate pastor in 1977. In 1979, Cardinal Timothy Manning appointed him pastor of the parish, a position he held for 20 years. As a professional musician prior to his time in the seminary, Msgr. George was able to bring these talents into his ministry. At Christ the King, he fostered a parish community of spirituality. He always had a meaningful message in his homilies. He counseled people with their problems. He fed homeless people who knocked at the rectory door. He helped parishioners in need find housing, legal aid, and financial assistance. He provided help and guidance to several newly ordained priests who were appointed to Christ the King for their first assignments. After his retirement, he established an endowment trust fund to provide for the poor of the parish. Msgr. George retired from Christ the King on July 1, 1999, and lived privately with his brother, Msgr. Joseph George, retired pastor of St. Paschal Baylon Catholic Church in Thousand Oaks, until his brother's death in 2011. He then resided in Fountain Valley, near his brother John. He is survived by his brother John and sister-in-law Ro George, sisters-in-law Mary Ann George and Marilyn George, 9 nieces and nephews, and 14 grand-nieces and nephews. He was preceded in death by Daniel and Jennie George (parents), Msgr. Joseph George (brother), RoseAnn (sister) and Gene Jasper, Daniel George, Jr. (brother), and Michael George (brother). A Vigil will be celebrated April 26 at 7:00 P.M., and a Funeral Mass will be celebrated on April 27 at 11:00 A.M. at Christ the King Roman Catholic Church in Los Angeles.