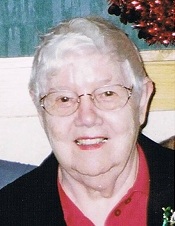 Monnie "Christella" Ford Stevens was peacefully called home by her Heavenly Father on Wednesday, July 25 2012, at her home in Torrance CA. She was with her loving husband John Leslie Stevens of 70 years, her son Lance Stevens and daughter-in-law Jeanine Stevens at the time. She was a loving wife, mother, grand-mother aand great grand-mother. Christella is survived by husband John Leslie Stevens, her three children, Judy Lynn Hudson of Texas Cathy Ann Sivoli of Torrance and Lance Stevens of Riverside Ca, seven grand children and four great grand-children. Christella was born Monnie Christella Ford to Barney Ford and Grace Baxter Ford on April 11, 1922 in Cave City Arkansas, The middle of three siblings, she is preceded in death by an older sister, Delvenia McKinley and is survived by her younger sister Leota Mae Hooten. She met John Leslie "Les" Stevens, her life long partner, at a baseball game in Cash Arkansas. Les was with his best friend Rufus McDaniel, and Christella was with her best friend Imogene, They were wed on May 24th 1942, in a joint ceremony along with Rufus and Imogene McDaniel. Christella and Les' lives together consisted of many adventures, Leslie inlisted and served honorably in the US Navy during WWII where their lives took them to Pensacola FL, Portsmith VA, San Diego and San Fransisco CA. When Les went overseas, Christella returned home to Arkansas and made a living as an educator while attending Harding College. She later recieved her Bachelors Degree from Washington University in St Louis Missouri. In 1956 Christella and Leslie moved to California, where she attended the University of Southern California and recieved her Masters Degree. She retired in 1983 from Torrance Unified School District with 28 years of service after being an educator for 40 years. Christella and Les loved to travel and the family spent summers visiting each contiguous US state, Canada and Mexico, Later she and Les visited Hawaii. Christella loved to sew, knit and crochet and many of the caps she knitted she gave away or donated to missionaries, childrens groups and cancer patients. It made her happy to know that her caps were being worn around the world. She was also an excellent southern cook and famous (at least in the Stevens household) for her fried chicken, corn bread dressing and coconut cream pie. Christella was a life long member of the Church of Christ, and most recently attended the Redondo Beach Church of Christ.