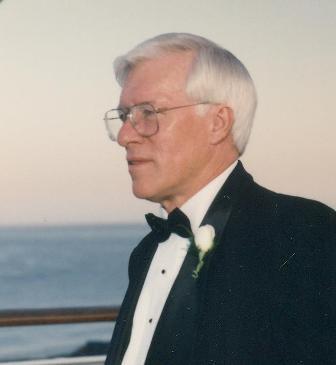 Milton James Graham, Jr., beloved husband, father, and friend died of acute myelogenous leukemia on April 4, 2014. His family was at his side caressing and embracing him with quiet conversation, sweet music and prayers until the end. Born in Kingston, PA on July 31, 1931, he spent his childhood in Syracuse, NY. He graduated from Eastwood High School in 1950 and attended Syracuse University's College of Forestry before enlisting in the Coast Guard in 1952. A veteran of the Korean Conflict, he served four years in the Coast Guard and achieved the rank of First Class Radioman. Milt received his degree from the Capitol Radio Engineering Institute in Washington DC in 1959 and resided with his family in Franklin, MA and Manhattan Beach, CA while working for Hamilton/Avnet Electronics. His career spanned thirty-four years when he retired in 1993 as Senior Vice President of Sales for Avnet Electronics and Corporate Vice President of Avnet, Inc. A talented man, he began performing at a young age as part of the tap-dancing Graham Trio with his brother and sister. Milt loved to sing and dance and would liven up any occasion with a funny joke or anecdote. He was a member of a barbershop quartet, sang in his church choir, and performed with The Franklin Singers, Norton Singers, and Chaminade Opera musical groups, where his talent shined. As a young man he was an active member of the Boy Scouts of America, where he achieved the rank of Eagle Scout. His passions included sailing, camping, skiing, golfing, cooking and gardening. He raced planing hull class boats and participated in the Olympic trials in Montreal in 1967. He enjoyed many years of sailing with his good friends and family on the Chesapeake Bay and Pacific Ocean, including the Newport to Ensenada races. Milt was president of the Manhattan Beach Community Garden and Volunteer Docent for the Manhattan Beach Growing Great gardening program at Pacific Elementary School, where he thoroughly enjoyed helping the students. He was an energetic grandfather who loved spending time with his grandchildren, which included teaching them the art of baking the perfect Christmas cookie, insisting it was important not to waste the dough! His family would like to thank Dr. Sun, Dr. Hool, their staff, and the exemplary nurses and doctors at Providence Little Company of Mary Hospital, for helping Milt fight for as long as he could. He was never one to give up or complain. When asked how he was doing, Milt would give an honest, matter-of-fact run down of his struggles and always end with, "…but other than that, I feel great." He was devoted to Priscilla, his loving wife of 56 years and he was cherished by his daughters, Deborah Sax, Tamara Graham, Laura Sutton and Pamela Loiola, and his sons-in-law, Jeffrey Sutton and Jose Loiola. He was most proud of his grandchildren, Lauren Bliss and her husband, Robert, John Sax, Graham Sutton, Juliana, Sophia, Priscilla, and Victor Loiola, and his great-grandson, Ethan Bliss, all of whom live in California. He was an exemplary son to the late Helen and Milton Graham, Sr. of Central Square, NY; brother to Robert (Nancy) Graham of Syracuse, NY and Helen (Phillip) Anderson of Grand Junction, CO; brother-in-law to Patricia Graham of Syracuse, NY; Godfather to Norman Anderson of Boulder, CO; and Uncle Milt to many nieces and nephews. The family is planning a celebration of his life later this year. They were not prepared to lose him so quickly but rejoice in the blessing of having him in their lives. "I think a successful life is one in which you have many friends. And you look at the world through positive eyes. You're not always taking the world apart and trying to mold it into the way you think it should be. Rather, you accept what life brings and stay happy and grateful for what you have." ~Milt Graham