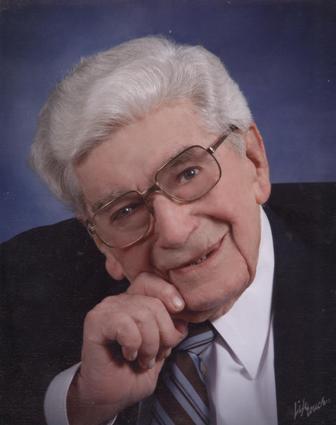 Milton Helmer Carlson, "Uncle Milty," was born August 17, 1920, to Carl Helmer and Esther Christina Carlson at home, 1916 Plaza Del Amo Blvd, Torrance, California. A member of the Greatest Generation, he passed away peacefully at his home in Torrance Tuesday, June 18, 2013, at the age of 92. Milton lived happily in his beloved Torrance his entire life with the exception of military service during World War II. Never married, Milton's first love was to his Christian faith, First Lutheran Church of Torrance California, and its mission to serve God and the community. He was a stalwart member for over 60 years. He personally described his conversion to faith as receiving a "calling from God's Holy Spirit" and was confirmed in the church as an adult in 1953. He served the church and congregation faithfully in many capacities: a day laborer during the building the "new" sanctuary in the early 1950s, Sunday school teacher, Navajo vacation bible school program, a member of countless church projects, and many lay offices of responsibility and influence. As everyone's "Uncle Milty" he became a Sunday morning institution, faithfully greeting many generations of worshiper during both services at the main church doors. He was eternally and deeply grateful for the unwavering love, fellowship, and support he received throughout his life from the First Lutheran congregation, especially during his last difficult years. He knew he had been truly blessed by God's hand. Milton began his public education in the kindergarten of Torrance Elementary and was an honor graduate of Torrance High School, Class of 1939, although he received his diploma from Santa Ynez Valley Union High School in Solvang, while enlisted with the Civilian Conservation Corp (CCC). Between high school graduation and military service Milton worked in various jobs in and around Torrance. He worked as an apprentice at Fay Park's Torrance Plumbing, a stock clerk at Hinkley's Market in Lomita, and junior apprentice at National Supply Company (ARMCO). He was also elected a union delegate and represented the Torrance unit of the O.W. I. U. at their annual convention. Milton enlisted in the U.S. Army Air Corps in October, 1942, as a non-commissioned specialist and sent to Roswell AAF in Roswell, New Mexico, where he received basic training and qualified as a LINK trainer instructor. He instructed B-17 and AT-10 cadets, pilots, and aircrew to fly and navigate aircraft by radio signals and flight instruments, all new technology in 1942. While stationed at Roswell AAF, the first Atomic Bomb was detonated at nearby Alamagordo (White Sands), New Mexico, and while he didn't personally observe the blast it was the topic of conversation for many days by his colleagues; no one knew what it was or its meaning. After the war ended Milton was transferred for reassignment to post conflict duty in Europe, however en-route his personnel records were lost, and he was reassigned to Fort McCoy, Wisconsin, where in February, 1946, he was Honorably Discharged. Upon returning home to Torrance, Milton reentered the work force at National Supply Company just as the post-war aerospace industry in Southern California exploded into modern commercial and military aviation. In April, 1947, Milton began work at North American Aviation, Los Angeles Division, as an expeditor and production control clerk. He would remain an employee with North American Aviation and North American Rockwell or its subsidiaries for 36 years, holding many jobs of increasing responsibility. While employed at North American Aviation, Autonetics Division, and Rockwell Space Shuttle Division, Milton would work on the X-15 Research Aircraft, Air Force F-108, and General Dynamics F-111 development groups, and the XB-70 projects. In later years he had a key role at North American Rockwell in the development of America's Space Shuttle program. Milton retired from North American Rockwell in April, l 1983, to personally take care of his ailing mother and to dabble in the local area real estate market as a salesman. Milton's final prayers were for his family and many precious friends: "God bless each of you and may He keep you in His loving care. He loves you all." Milton was preceded in death by his parents both of whom lived well into their 90s, his sister Helen (1949,) and brother Robert (2012). He is survived by his nephew Alexander Paul Huish, and nieces Claudia Bobrow, Vivian Carlson, and Linda Condelli, and their families. "Uncle Milty" will be deeply missed by the many whose lives he touched and influenced. Viewing will be held Saturday, June 29, 2013, from 4:00 to 8:00 PM, at the Rice Mortuary, 5310 Torrance Blvd, Torrance, CA 90503 (310) 792-7599. Funeral services will be at 1:30 PM on Sunday June 30, 2013, in the Sanctuary at First Lutheran Church, 2900 West Carson Street, Torrance, California 90503. Officiating: Reverend Dr. William L. Hurst. There will be a graveside commitment ceremony on Monday, July 1, 2013, 11:30 AM, at Roosevelt Memorial Park, 18255 S. Vermont, Gardena, CA 90248.