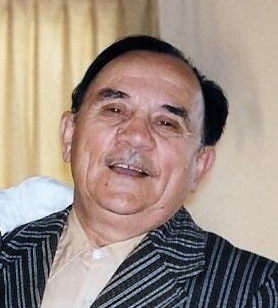 Milan Ola was born in Sutjeska, Yugoslavia on July 13, 1929 to Pavel and Georgia Ola (aka Oalâ). He married Persida Lelea on April 3, 1960. He died on December 10, 2018, in Torrance, CA, with her at his side. He was a farmer in the former Yugoslavia, until he left due to religious persecution, in August of 1966, with his wife and four young children. They were in a refugee camp in Italy for about six months, until they were able to immigrate to the United States, in March of 1967. They lived in New Jersey for almost six years, where two more children were born and he learned the trade of operating knitting machines. That would remain his main occupation until retirement. The family moved to California in January of 1973, where he spent the remainder of his life. Milan is survived by his loving wife of more than 58 years, Persida Ola, and six children: Lidia (Alex) Koch, Genna (Dwayne) Curtis, Diojen Ola, Viorika (Kai) Norton, Maria Ola, and Ellen (Douglas) Atkisson. He is also survived by nine grandchildren, whom he loved dearly: Jessica (Bradley) Kusicki, Laura (Bryan) Bodjanac, Matthew Koch, Hannah Koch, Caleb Koch, Joshua Koch, Nicole Atkisson, Kainoa Curtis and Dylan Atkisson. Nothing brightened his days more than their visits. He was preceded in death by his parents, Pavel and Georgia, his siblings, Isaia, Lidia and Ana, and his nephew, Dragalin. He is survived by one remaining sister, Sara, and several nieces and nephews. At the age of 89, he had lived longer than he, or his family had anticipated, and he was very grateful to be able to live in his own home to the end. However, his body was tired and he was ready to go home to his heavenly reward. His presence will be missed, but he is at peace. For that, we are thankful.