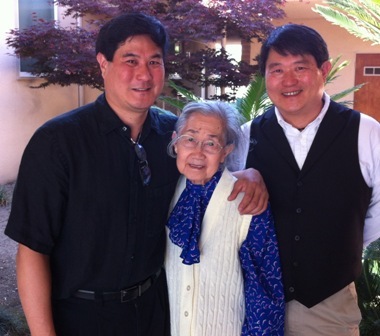 Michiko Sakayeda Michiko Sakayeda dearly beloved daughter, sister, wife, mother and grandmother passed away peacefully on March 31, 2017 at the age of 89. Michiko was born April 24, 1927 in Ivanhoe, California to Ageye and Uhachi Yasuda. She was the fourth of six children; her three brothers Dick, Takao, and James and her two sisters Shizuko and Mary. She attended the University of California Los Angeles earning a bachelors degree in zoology in 1950. It was while attending college that she met Mitsuo, her future husband of more than 60 years. Following her husband in his military career which spanned 27 years she travelled the world during their many deployments. She had two sons, David Hideo born November 26, 1955 in Osaka, Japan and Michael born September 9, 1964 in Alexandria, Virginia. After the retirement of her husband the family settled in Visalia, CA where she could be close to her mother and 3 brothers. During this time she helped work on the family farm owned by her brothers. Michiko had many talents at which she excelled which included: Japanese flower arranging, ceramic work, furniture restoration, painting and cake decorating. She is survived by brother James, sons David and Michael, daughter-in-law Laura, grandson Bob and wife Sandy, granddaughter Regina Michiko (her namesake) and husband Marty, and granddaughter Mitsuko "Mitsy" Ilene. She will be laid to rest together with Mitsuo at the Visalia Cemetery. She is dearly missed and will forever be in our hearts and memories.