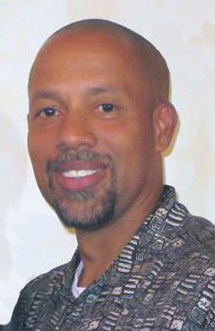 Michael Melvin Welch, son of Melvin Ralph Welch, and Willa Louise Terry Welch, was born in Inglewood, California on February 8, 1971. Michael resided in Compton, CA until the age of six when the family moved to Kaiserslautern, West Germany. After two years overseas, the family moved to Santa Maria, California where he progressed through the public school system, graduating from Santa Maria High School in 1988. Michael went on to graduate from California Polytechnic State University, San Luis Obispo (or as Michael would say “the REAL Cal Poly”) with a Bachelor of Science degree in Computer Science, in 1993. After graduating, he accepted a position as a software engineer in Silicon Valley. While employed in Northern California, Michael enjoyed networking and participating in community service and mentoring programs with the National Society of Black Engineers. It was through these involvements that he developed relationships with other black engineers, many of whom have become his lifelong friends. Michael’s time in the San Jose area became even more significant in early 1997 when he met the love of his life, Marche L. Boose. Michael and Marche dated for five years and married on May 26, 2002. In 2003, the newlyweds relocated to Inglewood, California. Michael was over the moon to return “home” to Southern California to continue his career in engineering and root for all his Southern California sport teams. On December 11, 2006 the family was blessed with the birth of their baby girl, Marjani Akuaba Welch. Marjani was the apple of Michael’s eye, and he was the king of her world; taking her to the opera, hockey games and sporting events of every kind. They enjoyed star gazing and eclipse chasing, playing the piano together, working on math, and helping her to develop all the skills necessary to succeed in life. Michael had a zest for life best described by his good friend Gretchen Satcher in a recent Facebook post, “I thank God for Michael and his joie de vivre. Be it family, friends, sports, music, opera, amusement parks, skiing, traveling, volunteering, technology, or Star Wars, his passion was contagious in all things.” For the past twelve years, one of the highlights of Michael’s week was his Sunday afternoon Volleyball game with his Marina del Rey beach family. As a devoted and loyal family man, Michael also enjoyed attending family reunions and all family gatherings. Michael’s thirst of knowledge made him like a walking encyclopedia and it was not unheard of for him to edit and fact check a Wikipedia page and/or social media posts. He was also a musical connoisseur, and could rap every word of Rappers Delight or any other old school hip-hop song when he wasn’t enjoying Opera or Classical music. Michael Melvin Welch transitioned to glory on the morning of December 28, 2017 at 5:55 am. He was preceded in death by his mother Willa Louise Terry Welch and father Melvin Ralph Welch. He leaves to cherish his memory his wife Marche Lynnett Boose-Welch; daughter Marjani Akuaba Welch; father and mother-in-law Mr. and Mrs. Robert Ben Boose; sisters, Melanie Kirk (Alfonso), Joycelyn Alston (Bobby) and Sydney Mosley and a host aunts, uncles, cousins, nieces, nephews and extended family and friends.