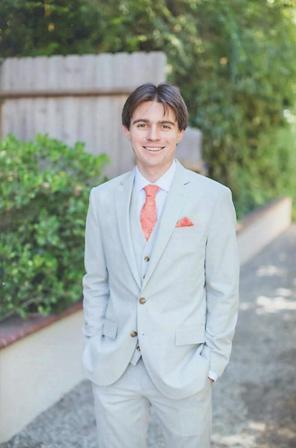 John Michael Larsen was born July 21, 1988, to his parents Gary and Sandra Larsen. Michael's family lived on the Palos Verdes Peninsula, near Los Angeles, throughout his life. He had one older sister, Erica, born in 1985. He attended Palos Verdes public schools through the eighth grade. Michael participated in organized baseball, basketball, and sailing. During these years he also joined a local Boy Scout troop, which he stayed with throughout high school, in growing leadership roles. He achieved the rank of Eagle Scout in 2006, and continued as an adult to coach younger Scouts in rock climbing at Joshua Tree National Park. Michael attended Chadwick School from 9th-12th grade. While at Chadwick, Michael distinguished himself in leadership and academics by earning the Headmaster's Award and with his induction into Cum Laude. He also served as editor-in-chief of the school yearbook, president of the Admirals, and was a Peer Mentor, in addition to pursuing interests as a photographer and filmmaker. Throughout his life, Michael had a love for and a deep commitment to wilderness. As a small boy he accompanied his father on hikes in the local mountains, and in middle school they began spending spring breaks hiking to the bottom of the Grand Canyon. From his early teens onward, Michael spent hundreds of nights backpacking in the Sierra Nevada and the Grand Canyon with family, friends, and Scouts. Michael attended Pomona College, in the consortium of Claremont colleges, graduating in 2010. While at Pomona, Michael majored in Environmental Analysis, writing a thesis on the economics of large-scale solar power generation. He graduated cum laude, and was selected for Phi Beta Kappa membership. Upon leaving college, Michael was selected as a Capital Fellow in the executive branch of the California state government. He worked at the State from 2010-2013, including both Schwarzenegger and Brown administrations. He worked primarily for the Strategic Growth Council, initially with Heather Fargo, and later with Mike McCoy. Michael was married to Caroline Carter Wright in August, 2013; they had met in high school and had remained together over the ensuing years. They had lived in Davis for four years, where Caroline is a Ph.D. candidate at U.C. Davis in ecology. The many interests that Michael and Caroline shared included outdoor and wilderness pursuits. In 2013-2014 Michael worked for former Davis Mayor Joe Krovoza's campaign for California Assembly District 4, which broadened Michael's connection with Davis and the surrounding region. In the fall of 2014, he began work with Kearns and West, a consultancy firm based in San Francisco, with a presence in Davis led by Mike Harty. Much of Michael's work involved water rights and allocations in the Central Valley. Michael passed away unexpectedly on July 13, 2015.