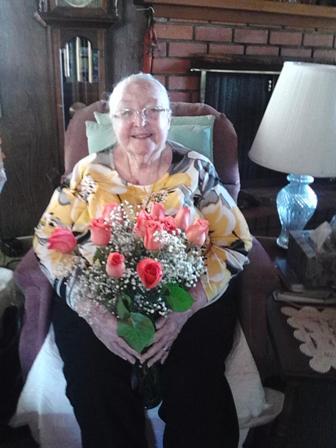 Maxine G. Adams passed away November 17, 2014 around 6:30 am at Torrance Memorial Hospital in the new Lundquist Tower. She was surrounded by family with her hand held by her great granddaughter Kaela Ayala. She is predeceased by her parents Rev Bessie and Rev Wilbert M. Gilroy Sr. (Assemblies of God); her twin brother Eugene who died at age 6; her son Mark Thomas Adams who died at age 22; her husband John Thomas Adams who also lived into his 90's. She is survived by her daughter Olivia Dianne Holzheimer of Burton Ohio (Tom Holzheimer); her grandson Dr. Daniel Merritt MaKieve, M.D.; her granddaughter Laural Anne MaKieve Ayala; her great grandchildren Mark Jacob MaKieve, Amanda MaKieve Hedadji (Amine), Geana Ayala, Joshua MaKieve, Kaela Ayala and Timothy MaKieve; great great grandchildren Triston MaKieve and Ava MaKieve; and many many cousins, nieces, nephews. Maxine had an interesting life. She was born in Breckenridge TX where her mother and father were in ministry to the poor. She remembers a tornado coming toward their home, and standing with her family in the doorway they watched it come toward them, split and go to either side of the house, leaving only enough wind to cause her mother's gown to ripple. The family came to California in the 20's over the corduroy road. Driving through a flooded area they feared they would be washed away; but Maxine's twin Gene said, "O Look! There's Jesus standing just on the other side." Their fears were calmed and they arrived safely in Walteria, CA where they set up a Mission Church. They later moved to Los Angeles and Maxine's uncle Pat built them a church on Fir Street where her mother preached and she played. At age 21 she was asked to manage Frantz Jewelry Store in Manhattan Beach CA. In 1951 she married John Adams and became Catholic because she understood the importance of worshiping together as a family: one God, one Jesus, same Lord. Maxine worked at North American Aviation, Inc. as a Supervisor in the Technical Publications department making the handbooks for their aircraft. She received awards for excellence. She became a 3rd Order Franciscan, worked in the Altar Society, made elaborate table decorations for church celebrations, tended to the sick and elderly, gave tirelessly of herself to her own aunts and parents as they lay dying. She recalls at her father's last hours at his home in Manhattan Beach he lifted his head toward their red door and nodded. She asked whom he saw: The soldier of the Lord marching into the house. Then he raised his hand and said "O Lord. You are so altogether lovely". Maxine had a wonderful caregiver Myrna Gotong. They sang and prayed together and each had visions which they shared. On the morning Maxine died an hour before Myrna was awakened and heard Mamm Maxine say "Let's get an In-N-Out burger and share it" Myrna didn't know the night before the family shared In-N-Out burgers surrounding her hospital bed. A visitation will be held at White and Day Mortuary in Manhattan Beach on Wednesday November 19 from 2:00 pm – 4:00 pm and 6:00 pm – 8:00 pm with the Vigil beginning at 6:30pm. The Mass will be celebrated at American Martyrs Church on Thursday November 20 at 9:00 am. Entombment will be at Pacific Crest Cemetery. In lieu of flowers, donations may be made to the South Bay Salvation Army or the American Martyrs' School.