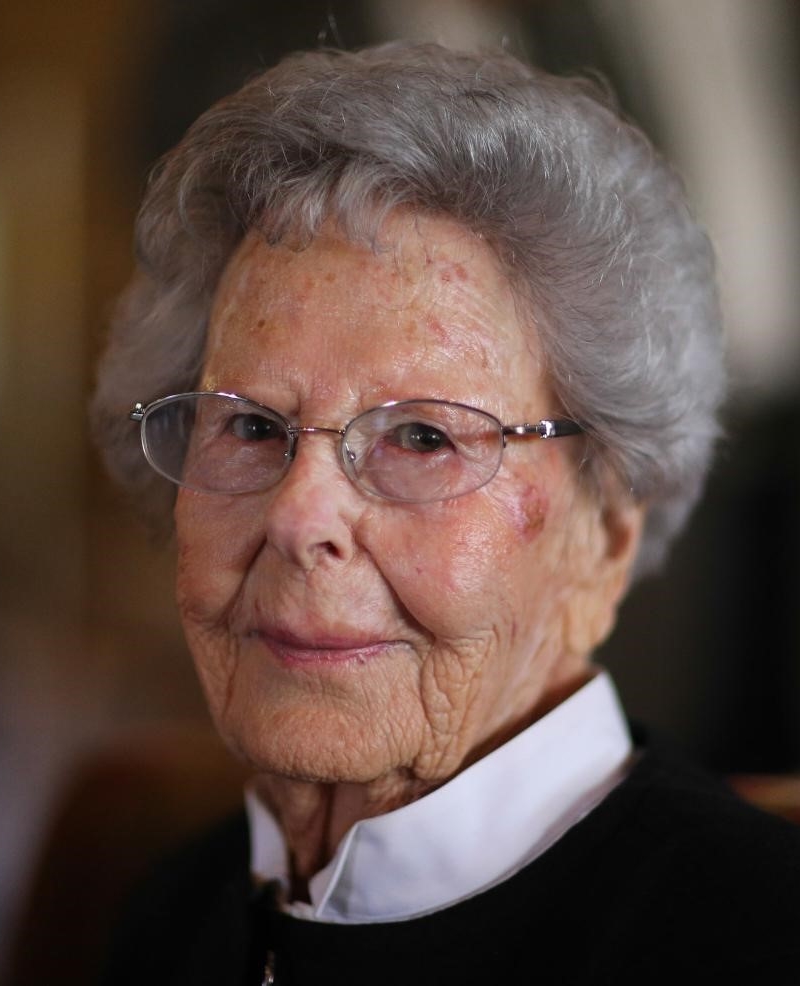 Maxine Dineen was born August 25, 1919, in Jackson, Nebraska. She was the youngest of eleven children born to Margaret and William Hartnett. She grew up on a family farm and went on to live a blessed, full, and meaningful life. Surrounded by family, she passed peacefully at home of natural causes, on March 4, 2021; she died, as she lived, with grace and dignity.

In 1936, she graduated from St. Catherine’s Academy in Jackson. She then completed a two-year business program at NTB Secretarial School in Sioux City Iowa. While at NTB, she learned bookkeeping, typing, shorthand – business skills she first used while living in Seattle working for the gas company in the early 1940s. It was also in Sioux City that she met her future husband, Richard “Dick” Dineen, whom she married in Santa Monica, California in 1944. As Dick pursued a career as an Air Force officer, they were blessed with five children: Richard, born in Asheville, North Carolina, Barbara (James) McGuirk, born in Oklahoma City, Teresa (Michael) Carman, born in Bermuda where Dick flew planes as a Hurricane Hunter, Kathy (Richard) Ellison, born in Arlington, Virginia while Dick was stationed at the Pentagon, and John (Nancy), born in San Bernardino, California.

During the 1960’s, Dick, now a full Colonel, worked as the Program Director for the booster phase of the Gemini Rocket Program. Maxine, standing by his side, met all of America’s first generation of astronauts – men like John Glenn, Wally Schirra, Gus Grissom, and Neil Armstrong. In addition to raising her family, Maxine and Dick ran several small businesses they purchased throughout the 1960, 1970, and 1980s. Surprisingly, well into her eighties and nineties, Maxine embraced the digital age by regularly using her computer to follow The Fighting Irish football team, email family and friends, and play online bridge, which she loved.

Maxine had a nimble mind that served her well as her family and the world around her experienced constant change. She was forever tolerant, kind, and understanding to her children, grandchildren, and great grandchildren. While never wealthy in a way that would impress, she provided a truly privileged background to her children by supplying unconditional love and the simultaneous knowledge that if they were ever going have anything in life, they were going to have to go get it themselves, struggling on their own terms to reach their own goals as they alone chose to define them.

Maxine is preceded in death by her husband, Dick, her mother-in-law, Sigrid, her parents, six brothers, four sisters, her daughter and son in law, Barbara and Jim McGuirk, and grandson Michael Ellison. She is survived by four remaining children, 12 grandchildren, 14 great grandchildren, and one great great grandchild.

Due to COVID restrictions a private memorial Mass and burial were held.

She will be forever missed, adored, and fondly remembered.