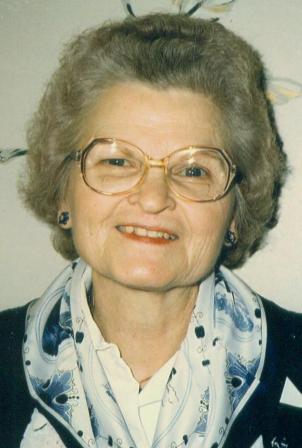 Our Mother, Mary Louise Theresa Macke Stech finally reunited with our Dad in heaven on Monday, December 22, 2014. She was born on September 14, 1917, the third oldest of seven children of Bernard and Gertrude Macke in St. Henry, Ohio. She was married to Paul in 1941 and lived in Ohio for a while where their son George was born. They eventually moved to Arizona where their daughter Patricia was born. After that, they moved to California and after a while settled in Manhattan Beach. Mom was active in Altar Society in Ohio, Arizona and finally at American Martyrs. She also joined the Neptunian Club (a women's philanthropic club) and also the various schools PTA groups, holding many offices. Mom was an active member of American Martyrs Parish for many years. She was one of the first females that Msgr. Deegan asked to join as a Eucharistic Minister. She turned him down twice as she felt she was not worthy, but he was persistent and she finally accepted. Many people will miss her, especially her son George (Kathy) and daughter Patricia (James) and her grandchildren: Jennifer, Michael, Nicole, Eric and Thomas; her many relatives in Ohio and her wonderful friends in the Neptunian Book Group and Club, Altar Society, American Martyrs Parish, her neighbors and all of her wonderful friends. Thanks for being the best Mom in the world. We are glad you are reunited with Daddy, but we miss you.