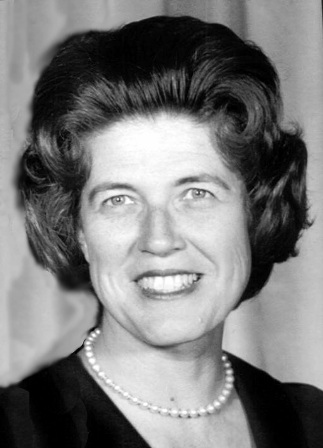 Mary Leonard Strong, 87, community leader, social worker, beloved wife and mother, died October 19, 2012 in her home in Ventura, CA. Born Mary Elizabeth Leonard in Washington, DC on December 17, 1924 to parents Amy Heslar and William Michael Leonard, Mary was strongly influenced by her family's faith and involvement in McKendree United Methodist Church, where her parents first met. Her mother, a teacher, instilled in her a love of education, particularly literature, history and music. Mary recalled while growing up in segregated Washington, DC, her mother planning parties for African American children in the "alley residences" near their Shepherd Street home. This experience made a deep impression upon young Mary and helped inspire her interest in social work years later. As a child of the Depression and a teenager coming of age during World War II, Mary showed an early interest in voluntarism and community. She was active in the Girl Reserves at McKinley Technical High School in Washington, DC. She graduated high school with honors in 1942 and entered American University. She was initiated into Alpha Chi Omega in 1943 and later became president of that sorority. She graduated in 1946 with a B.A. degree in Sociology and moved to Bay City, Michigan, where she worked as the Director of Teenage Programs for the local YWCA for two years. She entered the University of Minnesota School of Social Work, and obtained her M.S.W. degree in 1950. Mary moved to San Francisco in 1950 and was hired by the YWCA as Director of Young Adult Programs. In 1954 she relocated to Los Angeles and became a Registered Social Worker with the State of California, working for the Church Welfare Bureau until 1957. During her time in Los Angeles, Mary became active in political causes and campaigns. It was through the Adlai Stevenson presidential campaign that she met James Knox Strong, a dynamic young teacher and political organizer, to whom she would later become engaged. Mary and Jim were married on April 13, 1957. In 1959 she gave birth to a daughter, Judith Eleanor and in 1961 had a son, James Knox Strong, Jr. Mary delighted in her role as a mother, paying great attention to her children's early education while continuing to develop her career as a social worker and outside activities. After Jim Jr. graduated from kindergarten she began a nearly 25-year career with the Los Angeles County Department of Children's Services as a Program Specialist in child placement and protective services. She excelled in many areas, including as a leader and mentor in Camp Fire Girls, where she began as a Bluebird and Camp Fire Leader for her daughter's group and rose to become President of the Los Angeles Council of Camp Fire Inc. Mary was actively involved in other organizations, including the American Association of University Women and the National Association of Social Workers. When she retired from her social work role with Los Angeles County in 1992, Mary received recognition from a variety of community organizations for her years of dedication and service. Mary was involved in the Women's Fellowship of Manhattan Beach Community Church for many years since moving to Redondo Beach in 1973. Despite declining health, Mary and husband Jim enjoyed travel, politics, books and fine dining. Together they were active in the Redondo Beach Public Library Foundation as fundraisers, donors and volunteers in the library's bookstore. They also reveled in their children's accomplishments - Judy as a public relations consultant and community volunteer, and Jim, Jr. as a software engineer, musician and gourmet cook. Mary's husband passed away in December 2006, just a few months before their fiftieth wedding anniversary. In 2011, Mary moved to The Lexington Assisted Living facility in Ventura to be closer to her son and daughter-in-law. Mary leaves behind her daughter Judy and son-in-law Greg of San Jose, CA; and son Jim Jr. and daughter-in-law Nancy of Ventura, CA. In addition to her husband Jim, she is predeceased by her younger brother, William Michael Leonard, Jr. A celebration of Mary's life will be held at Rice Mortuary in Torrance, CA at a later date. Interment will take place at Pacific Crest Cemetery in Redondo Beach. In lieu of flowers donations may be made to the following organizations: American Association of University Women 1111 Sixteenth Street Washington, DC 20036 www.aauw.org Redondo Beach Public Library Foundation 303 N. Pacific Coast Highway Redondo Beach, CA 90277 www.rblf.org Emily's List P.O. Box 96612, Washington, D.C. 20077-7261 www.emilyslist.org