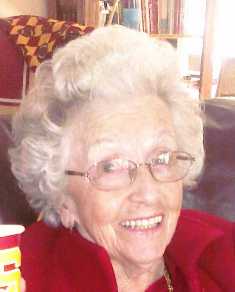 Another angel got her wings this week. Mary L. Beard, a 68 year resident of Redondo Beach, passed peacefully on January 25, 2012 with her family at her bedside. She was born in York, Nebraska on November 18, 1920. She grew up in Fort Collins, Colorado, which, according to her, was heaven on earth. She moved to Redondo Beach during WWII with her parents and new- born daughter to wait for her soldier husband to return from the European theater. She was an active member of Saint James Church where all four of her children attended school. She volunteered at both Saint James School and Bishop Montgomery high school for over 25 years. She was an active volunteer at South Bay Hospital and Saint James Church until the age of 82. She is survived by a loving family including daughter Marilyn (Art) Couvillon of Redondo Beach, Ca.; daughter Donna (Guy) Gilchrist of Long Beach, Ca; daughter Nancy (Jana Ransom) Beard of Ranchp Mirage, Ca; and son Bill (Kim) Beard, Fayetteville, NC. She is also survived by 6 grandchildren: Shelly (Todd) Taugner, Michael(Suzanne) Derouin, Monique (Eli) Gould, Matthew Gilchrist, Megan Gilchrist, Ryder Beard and 6 great grandchildren: Trevor, Shane and Kailey Taugner, Michael and Christopher Derouin, and Jesse Gould. She has been reunited once again with her beloved (soldier) husband Don, who this time has been waiting for her to return to him. A celebration Rosary and Mass will be held Saturday, January 28, 2012 at 10 AM Saint James Catholic Church, 415 Vincent Street, Redondo Beach, CA 90277. Reception to follow immediately at Rice Mortuary 5310 Torrance Blvd., Torrance, CA.