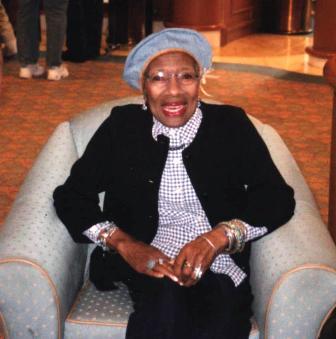 Mary Magdalene (Jackson) Cleveland was born to Richard and Nora Walker on October 15, 1920 in Oklahoma. She was adopted by Henry and Viola Jackson on November 20, 1924. She was the younger of two sisters and was preceded in death by her older sister, Naosha (Mary) Hamilton. Mary made her home in Los Angeles for over 62 years. God mercifully gave Mary rest on February 15, 2016. Her passing leaves us with a giant void in our lives. She had a lovely, gentle sly wit about her. Her delightful barbs came out of nowhere, when least expected. She had lines only Mary could deliver. In her humble way, she took care to let you discover how razor sharp she was. She loved life, culture and new experiences. Somehow she was genteel yet frank and honest. Mary was truly one of a kind. She will be greatly missed by all who were fortunate enough to have known her. Those she leaves to cherish her life memories include three nieces, Lenora (Willie) Bolden, Vathrice (Shal) Hartwell, Jeanette (Johnny) Johnson, two nephews, Ivory Hamilton and Clinton (Beverley) Hamilton. She leaves a host of grand nieces and nephews. She also leaves dear friends and fellow Californians, Roy and Ellen, Elizabeth (Little Lil), Judy, Melvin and Shirley. Mary's final wishes were to be spread at sea surrounded by rose petals off the coast of Los Angeles county.