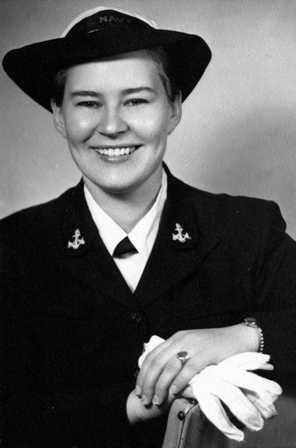 Mary Anne Serpan Jarboe Mary Anne Serpan Jarboe, 95, died peacefully at home in Torrance, California on December 15, 2014. She was born on April 19, 1919 in La Crosse, Kansas, growing up in a large, loving family during the Great Depression. She graduated from LaCrosse High School in 1939 and was a WAVE in the Navy during World War II, stationed in Coronado, California. Mary Anne remained in Southern California after leaving the Navy, settling in Hermosa Beach where she lived overlooking the Pacific Ocean for over 50 years. Toots, as she was known to her family, graduated from Woodbury College (now Woodbury University) in Los Angeles, California with a B.A. degree and began working at MGM Studios in Culver City, California in the late 1940's. Her long career with MGM began as secretary to the Chief of Security, later moving into the studio credit union and finally with casting for television productions such as the popular show, 'CHIPs'. She enjoyed sharing stories from her career in the movie industry with family and friends. On October 21, 1961, she married Howard C. Jarboe. During their 28 year marriage, they enjoyed sharing their love of western history and art; movies, particularly those from Hollywood's 'Golden Days'; antiques, and traveling both within the US and Europe. Howard preceded Mary Anne in death, passing on July 11, 1989. Mary Anne had a deep love of animals that began in childhood. During her life, she made many pets, both cats and dogs, part of her family. Taking advantage of the favorable Southern California weather, she developed skills and recognition as an expert gardner, specializing in prize winning orchids, including cattleya, phalaenopsis, cymbidium, and vandas orchids. She was also an avid bridge and poker player, often hosting friends for regular card games. She was preceded in death by her husband, her father, Joseph Serpan, her mother Mary Serpan and brothers Edward and George and sisters Helen and Ida Mae. She is survived by nephews George Rhea Serpan, Danville, California; Michael Serpan, Denver, Colorado; Joe Mays, San Antonio, Texas; and David Yost, Monterey, California; and neices Mary Helen Mays, San Antonio, Texas and Katherine Yost Hayden, Issaquah, Washington and many great nieces and nephews. She will be deeply missed by her family, many friends, and dedicated caregivers. A memorial service will be held at the Rice Mortuary, Torrance, California on December 22, 2014 at 1:30 pm. Burial will be in La Crosse, Kansas.