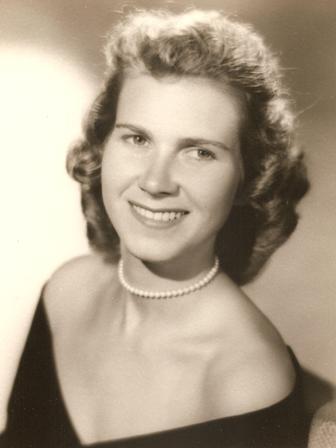 Mary Anne Henkel April 15, 1935 – January 24, 2016 Mary Anne Henkel passed peacefully from Earth to Heaven on January 24, 2016. She was born in Penalosa, Kansas to Lyle and Ida May Dean. She spent the first five years of her life with her five year older sister Betty (Michael and Patrick Gallagher) in that tiny town with no indoor plumbing and baths only once a week. But she loved growing up there! To really know Mary Anne was to understand that she was fiercely proud of her spartan Kansas roots, the tiny town she was from and that she was also extremely proud of our great country! December 7, 1941 changed the life of many American families and the Deans were no exception. Lyle eventually wound up working for Douglas aircraft in Van Nuys and moved the family to California. They eventually settled in Canoga Park and Mary Anne graduated from Canoga High School as the Women's League President. She matriculated to Pierce College and received her degree soon after. Her training was as an Executive Secretary and she worked many interesting jobs during her life. We think she could type a million words a minute or close to that any way. At the beginning she worked for Atomics International, then Computer Sciences Corp, a school for special needs children, the USC Medical Center and finally for world renowned brain researcher Dr. Bruce Miller of UCLA Alzheimer's Research. She loved the many interesting jobs she had during her life time. She was sharp as a tack, extremely charismatic and a giant asset for any company. She continued to work for the family real estate business until the day she passed. In 1958 at the age of 23, she married Richard J. Henkel whom she knew from middle school. Richard survived his wife of 57 years. They had two children, Cathy Yeich (Steve) of Palos Verdes Estates and Carl Henkel (Ana) of Redondo Beach. She is also survived by her grandchildren Eric Philip Yeich (15), Neil Andrew Yeich (9), Victoria Anne Henkel (10) and step-grandson Gabriel Miranda (15). She was an extremely loving Granny who loved to buy toys for her grandkids. She was surrounded by a loving family all the days of her life and she believed this was God's greatest blessing to her. It is here we can and should brag: she was honestly always the brightest light in any room. By far! Everybody wanted to be near her because of her wit, intellect, and charisma. People just naturally gravitated to her. She was FUN with a capital F! She could play the piano and ukulele and knew hundreds of songs to sing. She also had the fastest feet in town. To behold Richard and Mary Anne dancing was a thing of beauty and artwork. She was a devout Christian and had a deep spiritual connection with her lord and savior Jesus Christ and her namesake the Virgin Mary. Services for Mary Anne will be at St. Lawrence Martyr in Redondo Beach at 2 p.m. on Friday, February 5, 2016. In lieu of flowers, donations may be made to the American Kidney Fund.