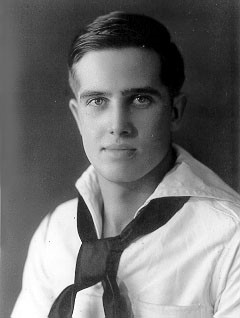 September 19, 1921 - December 30, 2017 The country lost a true patriot and genuine American original with the passing of Martin Leroy Koebel on Saturday, December 30, 2017. A decorated veteran of the Second World War, Martin was a loving father, grandfather, and great grandfather, a relentless autodidact, and a warmly cherished friend. Born in New London, Wisconsin, Martin enlisted in the United States Navy shortly after turning 18, and well before the country’s institution of a draft and formal entrance into the war - a point of deep personal pride for Martin. Martin would forever reflect on his service during the war with a dignified mix of pride, humility, and nostalgia. Wounded while serving as a Gunner’s Mate onboard the USS Pensacola at the Battle of Tassafaronga on November 30, 1942, Martin spent the ensuing six months recovering at various hospital facilities across the South Pacific. Martin returned to the U.S. thereafter and was discharged from the Navy shortly after the war ended. In civilian life, Martin settled in Torrance and built a 35-year career in the dairy industry, working for Challenge Dairy & Creamery and then the Ralphs grocery store chain. Along the way, Martin would fall in love, get married, and father three beloved children; Cynthia, Carol, and Ronald. Tragedy would mar the years ahead with the untimely passing of his children’s mother, but true to form, Martin knuckled down and assumed the role of single father; the responsibilities of which he discharged as best he could, every day of his life. In later life, Martin would find renown as an avid and knowledgeable grower of vegetables, and a formidable voice for temperance and common sense in Torrance civic affairs. Martin was preceded in death by his son Ronald. Martin will be reverently and gently missed by his loving survivors: his sisters Dorothy Sengebusch and Barbara Freeman; his daughters Cynthia (Richard) Talburt and Carol (James) Fry; his grandchildren Kim, Karen, Tonya, Aron, David, Amy, and Amber; and his great grandchildren Alex, Jarrett, Carmen, Moises, Amanda, Sophia, Ron, Amelia, Andrew, Addison, Ainsley, Teilar, and Dolly Martin. A service will take place on Wednesday, January 10, 2018, at 10:00 am at St. Lawrence Martyr Catholic Church, 1900 S. Prospect Avenue, Redondo Beach, California, 90277.