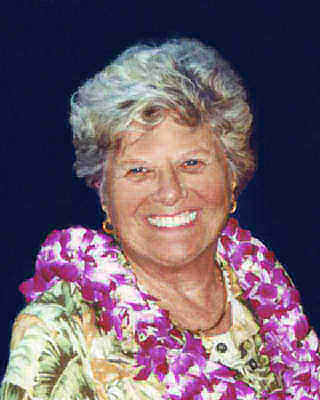 Marlene Schmidt passed peacefully from sleep into heaven on February 26, 2012. As was her habit, she proved the medical experts wrong by surviving her cancer five times longer than predicted. Marlene's greatest joy in her golden years was to travel by car across the country with her beloved husband of 56 years, Clete. She also enjoyed looking across Lake Havasu from the front porch of her vacation home surrounded by her husband, her four children and friends. Marlene did have a special gift for discovering retail treasures and creating dangerously addictive chicken noodle soup. She enjoyed feeding hordes of children, volunteering her time at Torrance Memorial Hospital and unearthing unexpectedly generous slot machines. She passed her passionate love of reading to her children through weekly excursions to the library. She was highly valued at all of her employments but was especially fond of her time and the friendships she developed at Metropolitan Stevedore Company. Marlene was born in Brooklyn, New York on August 23, 1931. She moved by herself to California in 1950. After meeting and marrying the love of her life, she moved to Rancho Palos Verdes and lived there happily for 48 years. Marlene is survived by her husband Cletus, her children Dianne, Richard (Cammie), John (Melissa) and Michael, her sister Helene McBride and her brother Artie Spreitzer (Frances). She was the proud grandmother to ten grandchildren. She was an unforgettable aunt to dozens of nieces and nephews. A memorial service will be held at St. John Fisher Church in Rancho Palos Verdes on Saturday, March 3 at 3 pm. Reception immediately following at her family home on Whitecliff Drive. In lieu of flowers, you may wish to consider making a donation to the Peninsula Friends of the Library in her honor.