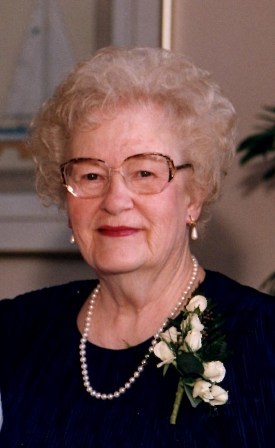 Marjorie Anne Marketto February 15, 1927 – January 21, 2017 Marjorie Marketto, loving wife, mother, grandmother and great grandmother passed away January 21, 2017 with her daughters at her side. Marjorie was born in Crystal Falls, Michigan, on February 15, 1927, the daughter of Hilma Peterson and George Brozak. Marjorie was orphaned as a young child and raised by her grandparents, Barbara Brozak Pozeski and Joseph Pozeski. She attended local public schools and graduated from Crystal Falls High School in 1944 at age 17. In September 1948, she married Louis Marketto, also of Crystal Falls. For many years, she was employed as a secretary at Kingsford Chemical Company. In 1961, Marjorie and Louis moved their family to Alhambra, California where they were members of All Souls Parish. After Louis's death in 1973, Marjorie worked as executive secretary for Sears Western Territory in the Sears "Cube" in Alhambra. After retiring, she moved to Rancho Palos Verdes in 1989 to be near her children and grandchildren. She was a member of Holy Trinity Parish in San Pedro and St. Lawrence Martyr Parish in Redondo Beach. Marjorie was devoted to her family, was an avid reader, enjoyed family gatherings, and was a stickler for proper grammar. Marjorie is survived by three daughters: Barbara Capodanno (Carmen), Mary Carroll (John), and Susan Gaitan (Kenneth), five grandchildren: Gina Warren, Marissa Capodanno, Katie and Chadwick Gaitan, David Carroll, one great grandson, Miles Warren, sister in law Phyllis Marketto of Michigan, and many nieces and nephews. Mass of Christian burial will be held at 10:00 a.m. on January 27, 2017 at St. Lawrence Martyr Catholic Church. Burial will be in Resurrection Cemetery in Rosemead California. Rice Mortuary in Torrance is handling the arrangements.