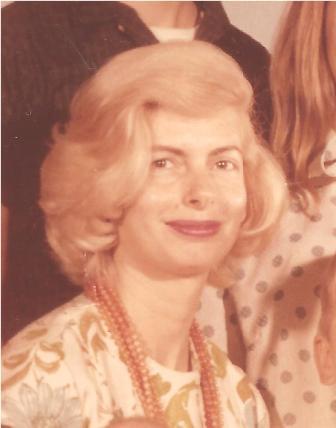 Marilyn M. Thompson, a 60 year resident of the Los Angeles area, passed away peacefully in her sleep on October 3, 2013 in Torrance, California with all of her daughters, a granddaughter and a great-granddaughter in attendance. Marilyn was born in Spokane, Washington on April 16, 1931, to Gordon and Dorothy Tellefson. She was 82 when she died. In 1942, Marilyn, her parents and sister, Megan, moved to Los Angeles near Hollywood. One of her favorite teenage bobby-soxer activities was to walk to the recording studios and watch the stars drive in and out of the entrance gate. It was during one of these outings that her life was forever changed. She was standing in the pathway of an oncoming vehicle leaving one of the studios, when a handsome sailor, who had been waiting for the chance to meet her, pulled her back from harm's way. She immediately let him know that he had prevented her from seeing Frank Sinatra. The rest is history. That sailor, Harry E. Thompson, became the love of Marilyn's life. They were married on March 5, 1947. Marilyn and Harry lived the Navy life while he was stationed in San Diego, then moved back to Los Angeles with her parents until they bought their first home in 1952 in a brand new housing tract on Fonthill Ave. in the Bodger Park neighborhood of Hawthorne, California. Many happy, loving (and boisterous) memories filled that home as they added rooms and added to their family. Marilyn and Harry raised eleven children who helped keep their neighborhood lively. Everyone knew "one of the Thompson kids." Not only did Marilyn have a houseful of her own, she brought in any of the other neighbor children who wandered over and sat at the dinner table. She was the neighborhood Mom with the adage "What's one more kid?" There was always room for more love. Marilyn was an active member of the St. Catherine Laboure Parish teaching Catechism classes on Saturdays and modeling in the annual fund-raising fashion shows. Needless to say, she mainly modeled the maternity clothes. After her last child was born, she returned to college. Marilyn took evening classes after working all day and raising her children. She entered the El Camino College nursing program and graduated to fulfill her lifelong ambition of becoming a nurse. She worked initially in a doctor's office as a medical assistant, and then became a specialized burn patient nurse (LVN) at Brotman Memorial Hospital. She later worked for Centinela Hospital Medical Center. Marilyn and Harry lived for 42 years at the same Hawthorne residence until 1994 when they semi-retired and moved to Las Vegas where she continued her nursing career. Some of her personal interests and passions were: chocolate, dogs, oil painting, the Dodgers, babies, the color pink, chocolate, roses, chocolate, flowers and gardens, Hawaii and chocolate. Marilyn is survived by her loving sister, Megan (Don) Koenneman; her eleven children, Dan (Tomoko) Thompson, Kathy (Paul) Burkholder, Kevin (Joan) Thompson, Peggy (Jim) Higginbotham, Eileen Tashnek, Colleen (Mike) Calderon, Michael Thompson, Tracy (Jim) Louette, Maureen Thompson, Sean Thompson and Brian (Brandy) Thompson; her 31 grandchildren and 32 great-grandchildren (and still counting). The family would like to acknowledge and thank Sheva Lim and the other loving caregivers at Mater Dei Home Care in Torrance who provided round the clock love and care during her final months. We know you are grieving with us. She was preceded in death by her husband of 61 years, Harry E. Thompson; granddaughter, Angela Michele; and parents, Dorothy and Gordon Tellefson. Viewing will be held Friday evening, October 11 from 4:30 to 8:00 p.m. at White and Day Colonial Mortuary, 901 Torrance Blvd., Redondo Beach. Pre-service viewing, funeral and reception will be at another location, Rice Mortuary, 5310 Torrance Blvd., Torrance, on Saturday, October 12, as follows: viewing will be from 9:00 - 10:00 a.m. The Service will be held in the Rice Chapel at 10:00 a.m. followed by a reception in the Lighthouse Reception Room until 1:00 p.m. Burial will be private at Inglewood Park Cemetery. For friends and relatives who are unable to attend the ceremonies, we will have a live, streaming video of the funeral service on this same website.