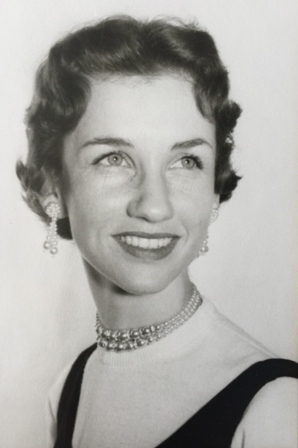 Marian Frances Wallace November 27, 1927 - January, 29, 2017 89 Years Marian Frances Wallace (Harris) died January 29, 2017 resting comfortably of natural causes due to old age. She was known as Marian Wallace during her long professional career and by her husband, J.B. Wallace, and his family and friends. And known as Frances Wallace to her Harris family and friends in her early years through high school and as she liked to be called again in her last years of life. Frances was the eldest daughter of Homer James Harris and Alice Marie Harris (Burford). Frances was born in Kansas City, Missouri. Homer and Alice were from Rogers, Arkansas and Big Springs, Texas; Homer and Alice met in Kansas City, Missouri and migrated to California, first to the Newhall area oil fields in 1936 and then at the outbreak of World War II to the south bay cities of Hermosa Beach and Manhattan Beach. Marian Frances was married to J.B. Wallace for 62 years from 1945 until his death in 2008. She is survived by her son Clay Wallace and his wife Annie, their three children James Jr., Leslieann, Bobby and four great grandchildren. And her sister, Mary Alice Theroux-Keller (Harris) and her two children Mark and Linda's extended family. Marian Frances graduated with the 1945 class of Redondo Union High School; also of El Camino College. She had a secretarial career at Northrop Grumman Aircraft extending from the Hawthorne plant to the then Beverly Hills/Century City Corporate headquarters executive offices. Marian then started a new career as a Court Reporter for the Superior Court for the State of California. And she is a retiree from both Northrop and State of California public employees association. Services will be held at the Rice Mortuary on Monday February 13, 2017 at 10:00 am with a reception following in Rice's Lighthouse Reception Room until 1:00 pm. Interment will be at Rose Hills Memorial Park in Whittier.